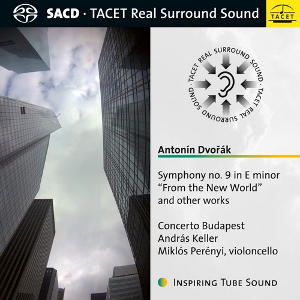 
Dvořák’s 9th symphony paints the town red, for sure. But that’s not all! The strings of András Keller are able to blossom like flowers. They don’t play uniformly but with a seemingly congenital naturalness as if it were easy for 14 violins to sound as homogeneously and at the same time as individually as a single violin. Also for the wind it is not the high performance that counts but the sensitivity and the flowing of the music, e. g. the English horn solo in the second movement. The brass: no power play but rich and gentle, always sensitive chords. – The tempi, the transitions, everything flows organically and invites you to go along. That is the great art of legato. Old-fashioned to some people, in fact timeless beautiful. No surprise that one role model for András Keller is Wilhelm Furtwängler. After that and without any showing off the loved by many cellist Miklós Perényi gently carries you off into the mysterious world of the rondo op 68/8 and “Klid” (silent wood) op. 95. Three slavonic dances from op. 46 round off the program.

‘Not another recording of the New World Symphony’ I hear you cry while surveying the 50+ versions of this symphony available in high res. audio, not to mention the countless versions on CD from some of the greatest conductors and orchestras over the past century. But do not be too hasty in dismissing this version of Dvorak’s most popular work nor the other pieces on what turns out to be a most engagingly executed and excitingly recorded SACD.

Before considering the audio aspect of this recording, captured in TACET’s proprietary ‘Real Surround Sound’ we should naturally assess the quality of the performances by Concerto Budapest and András Keller their Artistic Director and Chief Conductor.

The liner notes tell us that ‘Concerto Budapest is one of the most progressive and versatile symphonic orchestras based in Budapest, Hungary. It has a rich more than 100 years of history, and as a result of the current artistic leadership, it is full of dynamism from its young musicians, whose playing is characterised by the passion, energy and commitment they give to their performances of repertoire ranging from well-loved masterpieces to newly composed works of the 21st-century’. Purely on the basis of this recording I would wholeheartedly endorse this assessment.

Keller’s tempi in all of the work’s four movements of the symphony seem eminently well chosen. He eschews both the extremes of the high speed athleticism of say, Ivan Fischer (Channel Classics) and, at the other end of the spectrum, the more ponderous somewhat mannered reading from Andrés Orozco-Estrada (Pentatone).

From the hushed pp opening of the first movement the conductor’s attention to detail is immediately apparent and as the movement unfolds one is struck by the freshness of the orchestral playing especially from the nimble winds and confident brass. As is de rigueur these days Keller makes the exposition repeat. The cor anglais solo of the famous Largo is delivered with an unassuming simplicity, but though the orchestra’s full personnel of 85 musicians is listed in the liner notes, oddly, there is no mention of a cor anglais nor its player. The scherzo is crisp and direct while the finale is full of drive and vigour. Some may miss the effortless delivery and subtle nuances provided by some of the greatest orchestras in this work, but the enthusiasm of Concerto Budapest more than compensates for these.

Two of Dvorak’s short compositions for cello and orchestra provide a relaxing interlude after the thrilling conclusion of the symphony. Klid (Silent Woods) was originally the fifth part of a cycle for piano four-hands entitled 'From the Bohemian Forest’ Op. 68. Written in 1883 it was re-worked, first for cello and piano and then later the version for cello and orchestra heard here. The Rondo in G minor Op 94, published in 1893 was composed in order to showcase the formidable talents of Dvorak’s friend, cellist Hanuš Wihan for whom he would eventually compose his celebrated Cello Concerto. Both of these short, lyrical and enchanting pieces are given poised and somewhat introspective accounts by the veteran Hungarian cellist Miklós Perényi.

Finally the orchestra lets its hair down with lively and idiomatic accounts of three of Dvorak’s Slavonic dances from the Op. 46 set (nos. 5, 6 and 8) that bring this programme to a rousing conclusion.

TACET’s approach to recording is one that uses the whole acoustic space for the musical experience. It does so by placing the listener at the centre of the performance in a way that is is both unique and for many controversial. The liner notes include diagrams of the orchestral layout for the various works, so listeners can check the positions of the instruments in relation to what they are hearing. Those willing to embrace this approach and who are in possession of a well balanced surround system will be rewarded from this 5.1 channel SACD with an unrivalled sense of involvement with the music that cannot be achieved from stereo alone. To be fair TACET also provide stereo versions (SACD and CD) on this hybrid disc that should satisfy the unconvinced. The recordings were expertly engineered by Andreas Spreer in an unspecified venue in Budapest (2018).

Warmly recommended especially for those adventurous souls willing to dip their toes into ‘Real Surround Sound’.

This is available on both cd and sacd formats. Following the links to buy will take you to the cd version, which I'm sure would not be intent of the purchaser. The SACD does not appear to be available on any of the purchase links. The correct sacd is listed on Arkiv.

Further investigation reveals that this is being released in both cd and sacd formats. The CD is available in a few days and the SACD in Sept. If you order the SACD, be careful that you haven't received the CD. This has happened to me in the past on another label.