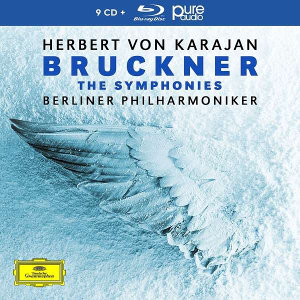 I guess the big question is did they do any kind of "cleaning" or "remastering" of Symphonies 1 - 3, or did they just upsample and leave it at that?

I was wondering the same thing. I already have the other symphonies, 4-9 on SACDs from Japan so I don't know if it's worth it to spring for this set as well. BTW, its selling for $40.75 at Presto Music in the UK which is quite a bit lower than other prices I've seen.

To all those who own this new edition already: does the booklet give any information about remastering/studio? - Symphonies 4-9 are also available now as 24/192 download, but without any additional information/booklet.

there is some very positive and detailed comments under the Amazon UK listing.

Gordon, thanks for the reference to the review. I found it useful.

Definitely some interesting info at amazon.uk. To summarize: DG remastered 4-9 from original analog at 96/24 (why bother upsampling to 192???) But still unclear if anything was done (remixing of any kind) of 1-3. Or did they literally just take the 1980s discs and upsampled them to 192 (again, why so high?)

AND - I think there is still a question if these are the same masters as the ones Universal released on SACD in Japan. Those were remastered by Emil Berliner in 2017 and appear to have been remastered at 192/24.

Symphonies 1-3:
1) Upconverted from CD to 192/24 for blu-ray by DG; remixing/remastering status unclear.

I'm not sure why people are assuming that (1) this is not the EBS remastering and (2) that' a 24/96 remastering upsampled to 24/192. The one Amazon UK review mentions both sampling rates but it doesn't seem from the tenor of the review that there's any inside information - I suspect the reviewer simply got confused.

Perhaps more to the point, if EBS just did a 24/192 transfer recently, why on earth would Universal pay for another one? I know we're eager to see the JSACDs as ne plus ultra, but it seems reasonable to assume it's the same transfer to me. Or is there other evidence?

Ubertrout, I've commented on this before several times, so I make it short:
1.) Universal and Universal Japan are totally independend companies.
2.) The remasterings that Universal Japan gathered via EBS are exclusively for Universal Japan.
3.) Universal is - so far - not able to use the Japanese (EBS) remasterings. That's weird, but true.
4.) In the end, it's a problem of license/copyright = legal questions.
5.) Consequently, Universal uses older remasterings from EBS (before 2008*) or they commission a new studio (like MSM Munich or Polyhymnia NL).

*) In 2008 EBS and Deutsche Grammophon/Universal got separated.

A very striking example for this absurd situation are Böhm's Mozart Symphonies/BPO on Blu-Ray and SACD: different remasterings from different studios. And most strange: the remastering work in both studios was done in the same year. Incredible!

It's a shame HvK's circa 1968 recording of Bruckner 9, also with the BPO, has been orphaned. Universal Japan included the Te Deum and Wagner's Siegfried Idyll in their SACD set of B7-9. [ Both fabulous performances. I wonder if James Galway was the flute on the Wagner, for the flute sound has a breathy fulsomeness typical of that artist ]. Sad even they excluded the earlier performance.

So, even though I had the Japanese release of 4-9, I got this box. Here's what the booklet says:

The remastering is by MSM Studios, Munich.

And that's all it says. Can anyone decode what the heck they're talking about regarding 4-9??

Does anyone know anybody at MSM Studios, to ask if they did any kind of remixing of Nos. 1 - 3?

Somewhere on the site I think I saw someone comparing a Japanese DG SACD (EBS remaster) and the same music on Blu-Ray (Munich remaster) and preferred the former, but in the January 2020 issue of TAS Ted Libbey prefers this Blu-Ray to the SACDs: "...in its depth and 'live' atmosphere is an absolute revelation. It captures the silky-smooth string tone and blaring brass of the Berlin orchestra while conveying a fabulously deep soundstage and an astonishingly wide dynamic range with no breakup in fortissimo" etc. He also loves most of the performances, citing the 5th as the most overwhelming ever recorded and one of the greatest of all 9ths plus "magnificent" accounts of 4, 6 and 7.