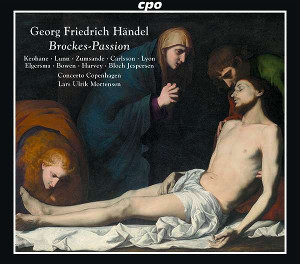 
The Concerto Copenhagen is Scandinavia’s most renowned Baroque ensemble and one of the most innovative such formations worldwide. Its trademarks are its unusual program combinations featuring Scandinavian rarities and famous Baroque masterpieces. This world-class orchestra now turns to Handel’s great Brockes-Passion in a CD recording based on the Halle edition of this composer’s works. The Passion text published by the well-to-do Hamburg resident Barthold Heinrich Brockes was a literary bestseller during the early eighteenth century. Composers set his poetic text, the first to add narrative elements to the Biblical Passion texts, more than thirty times. Today the best-known of these compositions is the one by George Frideric Handel, who set these verses to music in 1716, creating what would remain his only sacred work in German. Stylistically, however, the Brockes-Passion prefers to follow Italian models and speaks a musical language resembling that of the Baroque opera. Following concerts with this program, Die Welt enthusiastically summed up the result: »Mortensen’s elite forces from the original sound movement instinctively realize what their master and motivator wishes. […] One of the best early music ensembles paints a Baroque picture that richly displays magnificent color, suggests mystery, and repeatedly also is animated by dance. The method employed by Mortensen while modeling the music enables him to breathe new life into one of the most significant Passion oratorios composed prior to the later masterpieces by Bach.«