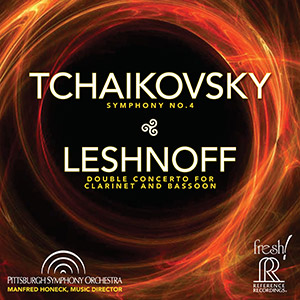 Tchaikovsky: Symphony No. 4
Leshnoff: Double Concerto for Clarinet and Bassoon

Maestro Honeck honors us again with his meticulous music notes, in which he gives us great insight into his interpretation as well as the history and musical structure of Tchaikovsky’s great Symphony No. 4.

The appearance on CD or even SACD of a new recording of Tchaikovsky’s 4th Symphony would, for most collectors, hardly raise a stir of interest as there are innumerable versions of this – one of Tchaikovsky’s most popular works – available in every format. However, as as many listeners will be aware, any new release from the award-winning team of Manfred Honeck and the Pittsburgh Symphony on the Reference Recordings label is worth investigating as, based on previous form, it is likely to yield a performance that brings new interpretive insights to even the most familiar staples of the classical repertoire. In addition, the superb playing Honeck always elicits from his virtuoso musicians coupled with state-of-the-art sound quality make any new recording from this source rather special. An added inducement here is the inclusion of the world premiere recording of an entrancing concerto by the American composer Jonathan Leshnoff.

The background leading to the composition of Tchaikovsky’s 4th Symphony is thoroughly explored by Manfred Honeck in the fulsome liner notes Reference Recording provide with this SACD. These notes also include the explicit ‘programme’ of the Symphony that the composer sent to his patron Nadezhda von Meck to whom the symphony is dedicated; one that is often quoted in connection with this work. The conductor then meticulously details his interpretative decisions for passages in each of the four movements in his typically imaginative and undogmatic manner leaving the listener to judge their validity.

The arresting opening of the 1st movement with its fortissimo statement of the ‘Fate’ theme is enunciated magnificently by the Pittsburgh brass who excel throughout this recording. Unlike some conductors who drive this movement too hard – thrills at the expense of poise and refinement – Honeck observes Tchaikovsky’s marking of ‘Moderato con anima’ to the letter, the combination of his steady pace and the supple phrasing of his players paying dividends as the music unfolds. Mention must be made of the characterful woodwind (especially the distinctive tone of Nancy Goeres’s bassoon) and the ethereal string playing in the central waltz section. In all respects this is a compelling account of the symphony’s finest movement. The tempo Honeck adopts for the second movement, that opens with a melancholy song for oboe, seems ideal in evoking the memories of youth and past regrets suggested by the composer’s programme while, as one might expect from these superb musicians, the ‘Scherzo: Pizzicato ostinato’ that follows is delivered with astonishing precision and lightness that demonstrates playing of the highest technical accomplishment.

Honeck unleashes the finale, a wild rondo, in a tremendous burst of energy in which triangle, cymbals and bass drum make a stunning impact aided by the spectacular high resolution recorded sound. Though his opening tempo for this movement is brisk it is never hectic, so clear articulation of the various lines is never a problem. After the return of the ‘Fate’ theme, and following a quiet timpani roll, the tempo is ratcheted up and the conductor drives the music to an electrifying conclusion that would have any audience on their feet cheering approval.

The recording by the usual Soundmirror team of “acoustic magicians” (Producer: Dirk Sobotka, Balance engineer: Mark Donahue) was made and post produced in DSD256 in the orchestra’s home, Heinz Hall for the Performing Arts, Pittsburgh (May 6-8, 2016) and is one of unparalleled richness, impact and realism that matches Reference Recordings previous issues from this source.

Most recordings of the Tchaikovsky 4th Symphony predictably offer one of the composer’s other popular pieces such as Capriccio Italien or the Romeo and Juliet Fantasy Overture as a makeweight but here we have something more enterprising. The composer Jonathan Leshnoff is probably unfamiliar to most people on this side of the Atlantic, but his considerable compositional output that includes four symphonies, ten concerti, and four oratorios has been widely performed in the United States. I suspect for most listeners, the only Concertante work written in the last hundred years, featuring the unusual combination of clarinet and bassoon, that they will have encountered will be Richard Strauss’s Duet-Concertino of 1947. It is, therefore, a pleasure to welcome such a meticulously crafted and instantly accessible piece as Leshnoff’s ‘Double Concerto for Clarinet and Bassoon’. It was commissioned by the Pittsburgh Symphony Orchestra and is performed immaculately and with winning style on this disc by two of the orchestra’s principals – bassoonist Nancy Goeres and clarinetist Michael Rusinek.

The Concerto is in three short movements (simply entitled, Slow, Waltz and Fast) and the melodic untroubled lyricism of the opening movement is certainly something it shares with the aforementioned Strauss piece. A humorous waltz led by the bassoon follows while the finale that opens with sonorous chords on the brass quickly becomes lively chattering dance that exploits the virtuosity of the soloists to the full. This Concerto provides the perfect foil to the Tchaikovskian Sturm und Drang that precedes it.

Together both works represent another unmissable release from the Reference Recordings and Pittsburgh Symphony stable.

Great review, superb playing. Another ‘must’ for Tchaikovsky fans. In terms of sound not to be missed either, especially by those with an up-market surround sound reproduction system that can take full profit of two basic elements on offer: an orchestra that can be driven to its limits from ppp to fff without falling apart, and the best possible sound engineering. I’ve only one question: Why has it taken so long? (recorded 4 years ago).

Thanks Adrian.
I assume that they have been waiting for a suitable addition for the 43 min. Tchaikovsky symphony and the Leshnoff ( rec.June 6-9, 2019) is a pleasant surprise and fills the bill.

Before launching into a rave review of this fine new recording from the Pittsburgh Symphony I took the opportunity to re-read Graham's recent review and realised that there was nothing to add to his excellent description of this commanding performance. Pretty much every point jotted down on my pad had been addressed in his review.

A couple of points are worth re-emphasising. The delicacy of feeling expressed by the woodwind in the second movement is overwhelmingly breath-taking and faithfully captured in a very realistic acoustic by John Newton's team. Honeck as ever maintains a tight grip of proceedings without inhibiting individual virtuosity while still maintaining a good pace throughout the performance. Clearly he has worked with individual musicians on emotional expressiveness and this aspect shines through time and time again especially in the woodwind as mentioned before but also in the opening fanfare from the brass; you would never believe that the soft background tam-tam of the timpani could convey so much meaning.

As the final crescendo approaches, Honeck slackens the reigns, the pace gathers and enthusiasm momentarily gains the upper hand over discipline, it is raucous, exhilarating if also a little untidy but as Graham observes would have had the audience on its feet in rapturous applause. What you do in the privacy of your own listening room is up to you but I am not ashamed to say I was on my feet clapping and wow-ing (if there is such a word).

Very highly recommended and arguably an automatic first choice for the 4th Symphony especially on SA-CD.

A great pity then that SM chose not to include audience reaction on this particular recording as in these strangest of lockdown times in isolation it would have reminded us how important and essential the relationship between players and audience is. This shared experience of music making and appreciation is the reason classical music continues to surprise and enthrall us.

Have to endorse all other comments and the excellent review.

The first movement is thrilling and brought a tear to my eye a wonderful SACD and highly recommended to all audiophiles.

After praising this recording highly I note that David Hurwitz of Classics Today com gave it the big thumbs down !

If it is any consolation, Paul: My ears tell me this is wonderful stuff. So, I don't think there is anything wrong with yours.

A thumbs down from Classics Today is nothing to worry about. But it also got a recent luke warm review at http://www.musicweb-international.com/classrev/2020/Aug/Tchaikovsky-sy4-FR738.htm

A reviewer has the right to express his or her own perception. But reading the MusicWeb review I was struck by the fact that the reviewer wasn’t pleased from the outset “I decided to listen to that work first, placing the CD in the player and pressing the ‘play’ button. There are no track numbers listed on this release and so I expected the concerto to be first on the CD as, after all, the finale of the Tchaikovsky Fourth is a pretty tough act to follow”.

About the symphony the reviewer complained that Honeck had a personal view (“had the conductor just played the work ‘straight’”) as if a conductor has no right to interpret and should only be allowed to follow notes and markings. The result of which you may or may not like. And the funny thing is that there is no hard and fast rule that Russian conductors are better at playing Russian music than anyone else. And what I do not understand is that he likes the slow Sanderling as well as the Mravinsky ( 5 an 6?) mono versions. Had it been compared to Mravisky’s fourth, it would have been close to Honeck’s electric account.

This is what I think and it may be just as subjective as what Lee Denham thinks. Well, we all have our hang-ups. Haven’t we?

A more positive review (with some reservations) from John Quinn, MusicWeb's editor-in-chief:

Mine finally arrived and am still digesting it (not literally !!!) both as a performance and recording.
Expected to be bowled over but will wait and see! 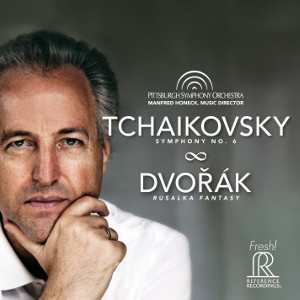