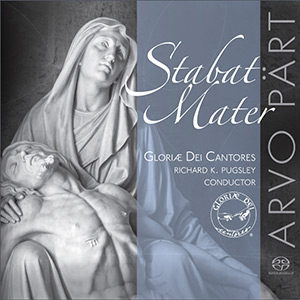 
Modest about his achievements yet authentically convinced about the role of his music in today’s world, Arvo Pärt (b. 1935) is today’s most performed “classical” composer. For the past forty years, Pärt’s compositions have shown and spoken the influence of multiple layers and global influences – the music of the Orthodox Church, bells, Gregorian chant, Renaissance polyphony, a compositional technique he developed called “tintinnabuli”, and…silence. This particular recording offers a unique cross-section of Pärt’s choral works, revealing the heart, soul and mind of a true master of his language in both text and music.

The expressive beauty and clarity of his music shines through the joyful dance-like rhythms of Peace Upon You, Jerusalem and the glorious setting of Mary’s own words in the Magnificat. Pärt’s masterful setting of L’abbé Agathon sets the scene of an ancient 4th century story of the chance (or was it?) meeting of the hermit Agathon and a leper. After several testings of the hermit’s patience and his generosity, the leper reveals himself to be an angel, and blesses the hermit Agathon, and goes on his way. The final work – one of Arvo Pärt’s largest choral works is Stabat Mater, written to express the passion, agony and love of Mary at the foot of the cross of her son.

In "Stabat Mater: Arvo Pärt", a collection of sacred works for choir, organ and strings, vocal ensemble Gloriæ Dei Cantores weave a musical tapestry out of the inextricable strands of worldly and spiritual life.

The sacred music of Estonian composer Arvo Pärt found a worldwide audience through the 1984 ECM New Series release "Tabula Rasa", which included his compositions "Fratres" and "Cantus in Memoriam Benjamin Britten". In CD format, Pärt's music was in a sense secularized — given a commodity presentation with ECM’s distinctive black and white graphics — and placed in a context removed from the origins of sacred music, the Church. In this new SACD, Arvo Pärt's music returns to that source.

The members of vocal ensemble Gloriæ Dei Cantores perform music not as a profession in the secular sense of the word, but as a religious vocation, with no less commitment than their professional counterparts. The ensemble's concerts and recordings are distinguished by a devotional character that arises from their ongoing practice of choral services in the Church of the Transfiguration in Orleans, Massachusetts.

The church was designed along the lines of early Christian architecture and is the home of the Gloriæ Dei Cantores ensemble. The singers participate in weekly and seasonal worship services, including evensong and liturgy of the hours in Gregorian chant. In preparation for this recording, each member committed to studying and reporting on Arvo Pärt's compositional style, demonstrating a level of engagement well beyond that of most professional classical organizations.

Included in this disc are a range of compositions: Peace Upon You, Jerusalem (2002), Salve Regina and Nunc dimitis (2001), to the lengthy dramatic works, L’abbé Agathon (composed in 2004, revised in 2008 for two soloists, female choir and string orchestra) and Stabat Mater (composed in 1985, revised in 2008). Over the years, Pärt has revised some pieces many times, and inspired other artists to do their own arrangements; in my SACD collection are Kuniko's renditions for percussion (Cantus - KUNIKO), Jörgen van Rijen's for trombone and chamber orchestra (Fratres: Bach, Pärt - van Rijen) and the Berlage Saxophone Quartet's for saxophones and violin (In Search of Freedom: Weill / Shostakovich / Pärt / Schulhoff / Eisler - Berlage Saxophone Quartet).

The compositional style of Arvo Pärt has been labeled "tintinnabuli", a term which the composer tends to mystify:

"…I must search for unity. What is it, this one thing… Traces of this perfect thing appear in many guises – and everything that is unimportant falls away. Tintinnabulation is like this. . . . The three notes of a triad are like bells. And that is why I call it tintinnabulation."

Conductor Paul Hillier is a champion of Pärt's music. Hillier characterizes the two voices of tintinnabuli style, which Pärt labels M-voice (melodic line) and T-voice (tintinnabuli line), as analogous to the condition of sin and the redemptive experience of forgiveness. In the music, tintinnabuli style can be recognized in Pärt's frequent use of stepwise minor scale melodies (M-voice) in counterpoint to lines drawn from the triad and from the overtone series of cast bells (T-voice).

But reducing Pärt's work to an ambiguous term and a rudimentary description of its workings fails to account for the range of effects produced within these self-imposed limitations. On first listening, the works can appear repetitious and harmonically static; closer listening reveals the subtlety and complexity of his method.

In his Magnificat, Pärt's skillful use of chromatics, space and dynamics, elevates the work from mere “holy minimalism”. There is a natural flow into his Nunc Dimitis, in keeping with the practice of singing the two works in the evensong services of the Anglican Church. The striking gruffness of the low notes for the male voices, in Pärt's system, corresponds to the "hum" tone of church bells; the low voices die away in the distance, like bell tones disappearing in the air.

"L'abbé Agathon", in this arrangement for soprano, baritone and string ensemble, was inspired by a tale about the Desert Fathers, monks who lived in the early centuries of the Christian era in the deserts of Egypt and North Africa. The legend recounts a meeting between the hermit Agathon and a leper who tests Agathon's unconditional acceptance and charity toward the excluded Other. Only after these trials does the leper reveal himself as an angel sent by God.

The dramatic line is rendered vividly through the remarkable performance of soprano Rachel McKendree, who conveys the leper's disguise through shadings of vocal characterization suggestive of hardship and bitterness, only to reveal the angel's true identity in the climactic phrase "Béni es-tu, Agathon, par le Seigneur du ciel et de la terre" sung in her pure voice. It's an exhilarating musical gesture that signifies the sudden, awe-inspiring appearance of the divine messenger. The silence that follows, just preceding the ending passage, suggests that Agathon's true reward is not a brief glimpse of the celestial, but the enduring silence of God.

Pärt's setting of the 13th-century Stabat Mater is notable for the clarity of his part writing and the capacity of his simple melodic lines to convey abject suffering. Conductor Richard K. Pugsley elicits from the choir a wide range of emotional expression, from the anguished call to share in the pain of the dying son, to the soft hush of weeping in compassionate solidarity with the bereaved mother. Ritornello passages for the strings add further urgency, and propel the development towards an emotional climax at the phrase "Juxta crucem tecum stare, et me tibi sociare in plantu desidro", where the word "planctu" — lament — soars upwards on a rising crescendo, and falls to earth on the word "desidero", the depth of the lament.

The sumptuous and detailed DSD recording was engineered in DSD by Brad Michel and Dan Pfeiffer. Michel is known to vocal music SACD enthusiasts for his outstanding recordings Britten and Finzi Song Cycles - Mark Padmore and Barber: An American Romantic - Conspirare on the Harmonia Mundi label. Even in two-channel audio, there is a deep soundstage with the organ set at a distance from the choir and the string instruments distributed to their left and right, as they would be positioned in a semicircle in front of the singers.

For all lovers of contemporary sacred choral music, and as an alternative perspective on the music of Arvo Pärt, this recording is highly recommended.

I stumbled on this music because Native DSD is offering it at a 20% discount this week. All the usual sample rates are available. I chose DSD256, per usual. When I checked here at HRAudio, I discovered that Mark Werlin provided a very positive review. I sampled the tracks and paid for the download. I love choirs and sacred music. I was literally blown away and felt immediately emotionally connected. The last track, Stabat Mater was exceptional in every way. You get it all in this track, including deep bass voices (throughout the album, actually) which I love. Every moment of this track is emotional. The full track is available on YouTube.

As an aside, I also downloaded the Stereo as well as Multichannel versions. I am in the midst of a serious upgrade to my gear. In about 3 weeks I will take delivery of a very expensive set of stereo floor standing speakers. I simply was not getting what I wanted from my music collection in my current system. I am very much looking forward to the upgrade, even though limited to stereo. We'll see how this works out for me. My old system was designed primarily for multichannel surround home theater.

This album will be near the top for testing the new speakers.