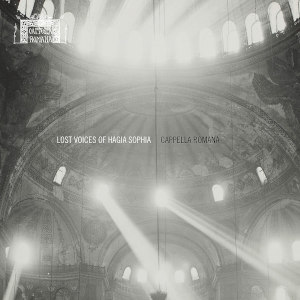 
Lost Voices of Hagia Sophia is the first vocal album in the world to be recorded entirely in live virtual acoustics. It brings together art history, music history, performance, and technology to re-create medieval sacred sound in the cathedral of Hagia Sophia as an aural virtual reality.

With a stunning reverberation time of over 11 seconds, the acoustics of Hagia Sophia were measured and analyzed, and auralized in real-time on Cappella Romana’s performance by the Icons of Sound team at Stanford University (iconsofsound.stanford.edu).

Lost Voices of Hagia Sophia presents more than 75 minutes of medieval Byzantine chant for the Feast of the Holy Cross in Constantinople, one of the greatest celebrations in the yearly cycle of worship at Hagia Sophia. This deluxe package (CD and Blu-rayTM) contains standard- and high-resolution stereo and surround-sound formats including Dolby Atmos™, as well as a bonus track and a 24-minute documentary film.

Enrich your experience of the music with in-depth essays, musical examples, and illustrations about the project in a 40-page booklet, which also presents all original Greek texts with translations in English. For a thousand years, Hagia Sophia was the largest enclosed space in the world. Let Lost Voices of Hagia Sophia transport you back in time to medieval sound and ritual in this monumental sixth-century cathedral.

It would be a grave mistake to believe that this release is for adepts of early medieval Greek Orthodox church music only. Apart from the fact that it certainly is, it is so much more: It’s Art, it’s history, it’s technical advance, it’s Magic!

During my time in Istanbul I have visited the Hagia Sophia (Αγία Σοφία), the former Greek Orthodox Christian patriarchal cathedral many times, and at each visit, I was impressed by the sheer volume under the dome, the dispersion of incoming light, and not least the indescribable, almost eery acoustics. With this new recording of the Portland, Oregon, based Cappella Romana, I immediately jumped at the occasion to learn how choral chant must have sounded in this unique environment.

In case some wonder why ‘The Voices’ weren’t recorded ‘in loco’, the reason is simple. When In 1453, Constantinople was conquered by the Ottoman Empire the ‘Ayasofya’ became an Ottoman imperial mosque where Byzantine choral, nor any other religious chants can take place, apart from their own recited verses of the Quran "in a melodious manner”. For that reason, the ‘Lost Voices of the Hagia Sophia’ had to be recorded elsewhere, using advanced technical means to recreate the acoustics of the world’s largest Byzantine Church, dedicated to the holy St. Sophia. Or, as the promotional text says: “the first vocal album in the world to be recorded entirely in live virtual acoustics”.

To give this aural venture tangible hands and feet, the Turkish religious authorities kindly granted members of the team access to the Hagia Sophia for measuring, analysing, and digitizing and whatever else was needed to emulate the acoustics for the recording of a series of chants in honour of “The Feast of the Exaltation of the Holy Cross of Constantinople” at the Centre for Computer Research in Music and Acoustics at Stanford University.

I strongly advise all those interested in how this was brought about, as well as to be able to better appreciate the results, to begin by watching the 24-minute video, included at the end of the Pure Blu-Ray Audio recording. And also, to read the liner notes before listening to what will undoubtedly come across as a unique “Sound, Space and Spirit” (dixit Bissera Pencheva) experience.

It is self-evident that for such an experiment a choir of exceptional professional quality is a ‘sine qua non’. Cappella Romana, under its experienced and highly qualified Music Director, Alexander Lingas, is such a choral formation. With 14 male and female voices covering the entire range from the very low bass upwards, they bring the listener under a mystic spell which, enhanced by the added acoustics, creates the feeling as though the choir is indeed singing in an immense Byzantine cathedral.

As long as the building is governed by its present caretakers, we will never be able to compare the virtual result with the real. But one thing is unmistakably clear: The ‘Icons of Sound Research Team’ do indeed ‘make-believe’ the listener that it is as ‘true’ as it must have been in the Hagia Sophia around 14 centuries ago.

Apart from admiration for Cappella Romana, and the in-depth research to make it all happen, one may hope that this recording will inspire present-day listeners to delve into Greek Orthodox history and how it survived under the Ottoman Empire and the Roman Catholic Crusaders, and also, how their religious chant may have interacted with Islamic music. I’d like to believe that in music there is no bridge too far.

The recording offers almost every sound format, from a simple, separate CD to Pure Blu-Ray 2.0 Stereo; 5.1 DTS-HDMA; Dolby Atmos™ and Auro-3D, all in 24 bit/48 KHz, plus mshuttle (for copying purposes). It may be clear that surround formats will give the best results.