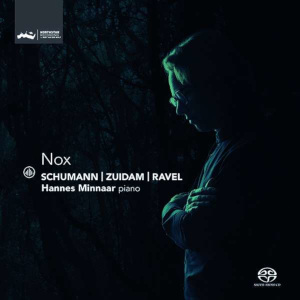 
Nox, the Latin word for 'night'. In the world of art, the night of Schumann's Nachtstücke, Robert Zuidam's Nox and Ravel's Gaspard de la Nuit creaks open its doors like a haunted castle for romantic poets and composers. Night-time visions became the foundations of a pre-Freudian subconscious in the late 18th and early 19th centuries. Some of the great writers discovered their dreams and anxieties, seeing themselves and the magic of imagination in the mirror of fantasy.

It was no coincidence that their work provided intellectual sustenance for Robert Schumann (1810-1856), who also had a literary gift. His earliest works, which were entirely for piano up until his Nachtstücke, Op. 23 (1839), originated in psychological impressions gained from literature. Schumann wrote to his beloved, Clara Wieck, that the work stemmed from a premonition. During the composition, he kept seeing visions of funeral processions, “Coffins and miserable, despairing people”. His instincts had not deceived him:on completing the work, with tears in his eyes, he heard that his brother Eduard was on his deathbed. Listening to the Nachtstücke again and knowing this, one can hear the shadows falling over light and life, depicted by the pianist's defeated irony.

For Dutch composer Robert Zuidam (b. 1964), night is the night of toil. Nox (2020) is a night owl's ode to the hours of his creativity.
Ravel had done everything he could in his piano cycles Jeux d'eau (1901) and Miroirs (1905) towards de-romanticising the 19th century character sketch, but he took an important step forward in Gaspard as regards both virtuosity and idiom. His aim was to produce something that was even more difficult to play than Balakirev's notorious Islamey. Gaspard is a deranged combination of abstract pianistic hyper-virtuosity with derailed eruptions of waltzes, peppered with raging, flamenco-style note repetitions and unplayable cascades of clusters of seconds, betraying the signature of Ravel's exceptionally dextrous thumbs.

But, in essence, Gaspard is a symphonic poem for piano. The work is subtitled Trois Poèmes pour piano d'après Aloysius Bertrand, and these poems are also printed out in full in the score. They are drawn from the collection of prose poems entitled Gaspard de la Nuit, Fantaisies à la manière de Rembrandt et de Callot, which were published in 1842. The infernal degree of difficulty is a metaphor for their contents; as Ravel himself stressed in one of his letters, Gaspard is in fact the devil.

For young talent, media attention is an important element. They fully deserve it. But more doesn’t necessarily mean better. I don’t know how extensive his media presentation has been compared to other pianists on his home turf but based on what I have heard, Hannes Minnaar tops my list of the younger generation in The Netherlands. He is not just very good, he is more, he has that indefinable artistic feeling, going well beyond mere technical mastery. Be it in the role of accompanist, concert soloist, or sitting alone at the Grand, each time he adapts himself as a chameleon to the task at hand. I found his Fauré: Piano Music - Minnaar a revelation and here he is with another solo album proving once again his rising star ever since obtaining third prize at the 2010 Reine Elisabeth Concours (Please note: experience learns that differences in the finals are small and that it is not always number one that ultimately wins a career. In 1968 the young Mitsuko Uchida came tenth!).

This recital is about an astonishing and colourful combination of ‘night music’, including a brand-new piece (2020) by the Dutch composer, Robert Zuidam, entitled Nox (night), which is also the title of this album, and - not mentioned on the cover - a ‘good night’ bonus track from Leoš Janáček. I must admit that I had never heard of Robert Zuidam (though regular Tanglewood visitors may). Thoroughly modern, without being eccentrically shocking, and thoroughly interesting. His ‘Nox’ is a discovery (and a clear invitation to visit Zuidam’s website to find out more). It is carefully placed in between Schumann’s ‘Nachtstücke’ and Ravel’s ‘Gaspard de la Nuit’.

“What’s in a name?” If one is not familiar with the tragic story behind Schumann’s night pieces, one might enjoy it as another example of Schumann’s gift for melody and romantic drama. However, Minnaar, with a sensitive awareness of the ‘tristesse’, gives ample attention and due respect to such detail. Yet, his grip is firm, and his varied expression in each of the four scenes well-judged.

Zuidam’s new composition ‘Nox’, consisting of 5 Nocturnes spanning around 25 minutes was, so I understand, written with Minnaar in mind and I cannot but agree that Zuidam could not have wished for anyone better. Hannes hits the right mood in all 5 of this major work, including the one remembering the great, modern Dutch musician/composer/conductor, Reinbert de Leeuw. What personally struck me is the so real-life scored second Nocturne ‘Insomnia’, in which he exposed with unadorned and dead-sharp precision ‘the feeling that you cannot sleep, which makes you so irritated that it prevents you from falling asleep’. With which I’d also like to say that Robert Zuidam is an extraordinarily gifted composer deserving wider recognition than he already enjoys (Tanglewood). Believe me, this is impressive.

With Gaspard de la Nuit, Minnaar is back on known, French territory (Fauré recital, see above). Competition in this field fierce. Several excellent high-resolution accounts have come my way, like for instance this most remarkable Poems & Pictures - Gómez-Tagle and also Ravel: Orchestral & Virtuoso Piano - Larderet, to which I’m pleased to add Hannes Minnaar’s account. The ‘Trois poèmes pour piano d’après Aloysius Bertrand’ is not about happiness and are by no means easy fare. But it is not just in the technical aspect where Minnaar’s star shines. It is his imaginative ability that wins my day. Conveying the sensuality (Ondine) contrasted by the grim and mystic parts of the other fairy tales (Le Gibet - the gallows - and Scarbo) so frightfully convincing, that it brings the ’musical transcripts’ of these poems about picturesque et fantastique visions of the Middle-Ages to tangible life.

A delicious bonus is your reward: ‘Dobrou Noc’. This piece brings peace and makes you happily ready to call it a day.

But before you go, please note that Hannes Minnaar plays on his favourite Chris Maene Straight Strung Concert Grand, guaranteeing a warm and noble tone and that the surround sound on this recording is as perfect as Bert van der Wolf of Northstar Recording can make it for us, discerning music lovers of the best available quality.

I am admitted Hannes Minnaar fan. I own most all of his album releases and I was most impressed with his "Fauré - Piano Music". I listen to it often. Of course, that led me to this release, "Nox". I've listened to the album several times and at the end, I am very pleased with my purchase. The music is challenging to me. One would think "night music" would be a lullaby of sorts, entrancing, along with a glass of wine, as you gently fall asleep. This is not the case. The music is a bit jarring, some of it as if in a nightmare. The track, "insomnia" conveys the desperation you might feel needing sleep. If you give it time, the music will begin to affect you. You will "feel" the darkness of night which many of us do not experience. I get it now. I am emotionally connected and I realize that some people are indeed "night people".

I love solo piano music. This one is gladly added to my collection. The sonics (in surround) are superb. I was unfamiliar with this music. It is so fresh and new to me that I am drawn to it. Hearing it is satisfying. I admit, it took some time to understand it. But, now, it gets a good amount of play time in my home.

This is my first encounter with Minnaar, but I purchased this release based on reviews and preview samples. I am not at all disappointed, and my experience largely confirms the review here. After listening a few times, I will share a few overall impressions in case they may be helpful.

Upon playing the first track I immediately noticed the gorgeous tone, very warm, full, yet clear. In multichannel with a subwoofer, the presentation is seamless and sumptuous. Even with full-range speakers, the subwoofer is well integrated and adds a touch of realism to the bottom octave. If you like a warm piano sound, I cannot imagine you could do any better. The playing is considered yet un-shy, with attention to detail but not putting it under a magnifying glass. Gracious, confident, and amiable. I noticed this with the Schumann, but I think it applies across all tracks.

The title piece, Nox, is quite beautiful. Minnaar communicates clearly throughout, and the performance is very assured with good emotional range.

In approaching a famous and often-recorded piece like Gaspard de la Nuit, it's difficult to cast aside experience with previous recordings. I tried to keep an open mind. I enjoyed the beautiful tone and the coherent approach, but everything felt a little too even-keeled to be a favorite rendition. I believe the piece does well with a little more daring and edge, but it's still an enjoyable performance with a distinct personality. It's just a little warm and controlled for my taste.

In all, the recording is sonically astounding: along with the out-of-print Tchetuev recordings on Caro Mitis, the best multichannel solo piano recording I have yet heard. Perhaps the best. The playing is assured and convincing, with an incredibly rich tone. The Schumann and Zuidam are the real reasons to get this, but the Ravel isn't bad either. Plus, the Janaček is a nice bonus.

Just played this recording through, well, twice actually. Apart from the high degree of artistry- is this the best-sounding piano recording ever made?