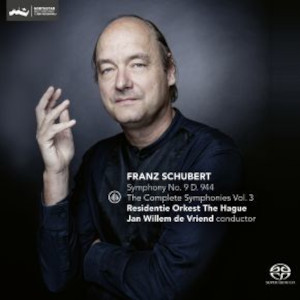 
For about 150 years it was believed that Schubert composed his Ninth Symphony in 1828, not long before his death but, musical scholarship being a continuous process, this theory was later disproved. It was discovered late in the 20th century that in fact he composed most of this work three years earlier and revised it in 1826 and 1827. Following a period of poor health, 1825 was a better year for Schubert, while his finances were also improved.

Schubert never heard a single performance of many of his works, including this great symphony. When it was rehearsed in 1827 at the Gesellschaft der Musikfreunde in Vienna, the string-players complained that passages in which a rhythmic figure is obsessively repeated, especially in the finale, were unplayable.

In May 1824 Schubert attended the first performance of Beethoven’s Ninth Symphony. Beethoven revolutionised symphonic form, expanding its expressive range enormously, his Ninth Symphony in particular being conceived on a much grander scale than any previous symphony. Schubert was just one of many composers influenced by Beethoven’s achievements.

Many scholars have suggested the various ways in which Schubert was influenced by Beethoven, but the most extraordinary aspect of Schubert's mature music is its complete individuality. The compositional techniques, the handling of tonality and structure, and the orchestral sound of these two contemporaries have very little in common. Schubert’s own profound originality is all the more striking for its emergence at a time when Beethoven's impact on the development of the symphony was so revolutionary and far-reaching.

Schubert’s Symphony No. 9 D 944 “The Great” is what it says, though perhaps not in the sense some of us would expect. Depending on who is playing (and to what extent repeats are respected) it takes from around 45 (Toscanini!) to a massive 62 plus (Abbado with his acclaimed 2011 Mozart Orchestra’s account) minutes to unravel the score in all its majestic glory. Scholars rank Schubert among the Great Symphonists of All Times. With its monumental proportions or ‘divine longueur’ as Schumann put it when he discovered the score in 1838, it is indeed a Great Symphony, but does it have the same ‘greatness’ as its apparent model, Ludwig van Beethoven’s Ninth as some assert?

I can hardly think of any other symphony having been recorded as often as this one. It seems as though no conductor of Name & Fame, and many less so, have wanted to miss out on it. The result is an absolute overkill in choice for today’s classical record collector. Adding another version is hazardous and may even be a ‘mission impossible’ if it weren’t for the fact that this new release is part of a so-far highly acclaimed survey of Schubert’s symphonic oeuvre; one day no doubt to be released as a boxed set.

It’s not just in length, but also in the orchestration, that Schubert wanted to show little modesty to make it ‘Great’. A massive wind section is required, consisting of 4 flutes, 4 oboes, 4 clarinets, 4 bassoons, 4 horns, 2 trumpets, and 3 trombones, demanding a large string complement to balance the soundstage. Together with its rhythmical inventions, the overall structure poses a real challenge for conductors and musicians alike to bring this symphony to a well-considered conclusion without asking too much from the average audience’s attention span, and possibly that of the musicians as well. Its envisaged premiere in Vienna (1828) did not take place: “Too long and too difficult” was the verdict. When finally, Schumann brought the Symphony in 1839 to the concert hall (Mendelssohn conducting) it was premiered in a cut version. And isn’t it revealing that in our time several prominent conductors have decided not to play all repeats?

I must confess that Schubert’s ‘Great’ is not my favourite. I would not have minded had he stopped after the ‘Unfinished’ eighth, certainly if played so grippingly by Jan Willem de Vriend and his forces from The Hague. Why? His ninth symphony has, in my view, many confounding elements, as though this enigmatic composer, described somewhere as “ a secretive and introvert man to the point of refusing any impediment on his musical creativity”, haunted by his ambition to equal Beethoven, tried to squeeze in too many ideas, including a schematic theme, reminiscent of the ‘Ode an die Freude’, in the final movement. An overdose of purpose? It is open to debate.

That said, I must also recognize that Willem de Vriend’s account demands anyone’s attention for its sheer commitment. First of all, because he is not a run of the mill conductor. He has his own ideas, largely stemming from the days that he led from the violin a period band of renown beyond its borders: The Combattimento Consort, Amsterdam. During his subsequent tenure at The Netherlands Symphony Orchestra, he transformed this provincial orchestra (Orkest van het Oosten) into a top-class formation with a unique mix of period and modern instruments, lending it an unusual yet most attractive sound. This effort has in part been transposed to the Residentie Orkest The Hague when he became its Principal Conductor in 2015. The well-judged, and played, introductory horn call of the symphony makes this abundantly clear.

As is furthermore evident from previous instalments, de Vriend’s reading is not one of smooth, romantic execution. In the liner notes reference is made to such notions as vigorous, power and aggressiveness, in contrast to gentle and lyrical. It is all there. Despite having scaled-down the woodwinds to the usual doubles of flutes, oboes, and bassoons, de Vriend ably exploits the hefty parts in the score for the wind section and the tympany to accentuate compositional polarities to maximum effect. Even the lyrical second movement, Andante, gets a keen-edged contrasting ride. I have no difficulty with that, be it that in the tumultuous parts of the first movement the strings are somewhat blown away by the wind instruments combined with the power of the tympany. However, this inequality disappears in the magically thrilling Scherzo and the triumphant conclusion.

In the final analysis, it is difficult to put a clear label on this account. It reminds me of the unrivaled individualism of Nicolaus Harnoncourt. Is it remarkable? Yes. Controversial? Possibly. But whatever one may think, it is at any rate not a run of the mill reading, laying unreservedly bare the ingenious structure, with its contrasts and drive. If that is your take, this may well be a prime choice. If not, there are other, more ear-pleasing options in Hi-Res, such as Schubert: Symphonies Nos. 7 (8) & 8 (9) - Dausgaard, or better still, Schubert: Symphony No. 8 (9), 5 German Dances - Fischer.

There is one other thing though. The recording was made in the orchestra’s temporary rehearsal venue (The Atrium, The Hague), a converted assembly hall of a Technical School that does not seem to cope well with de Vriend’s extrovert playing, whereby the strings do not always get their full due and the tympany often overpower even the brass. It does admittedly give an extra thrill, but it also creates an additional balancing act for the recording engineers. In the process, some of the definition is lost, although what remains is still sufficiently state-of-the-art. 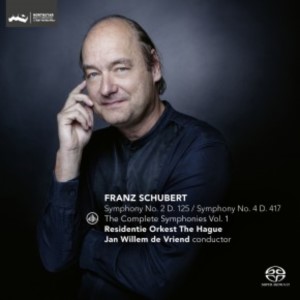 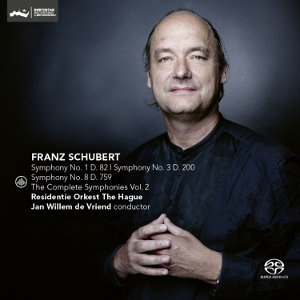