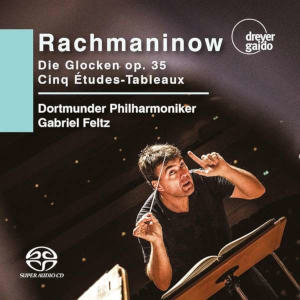 This is the fourth SACD from Gabriel Feltz and his Dortmunder Philharmoniker released on the Dreyer Gaido label that features the music of Rachmaninov. The two performances recorded here were of live concerts given in the Konzerthaus Dortmund (February and November 2019).

Rachmaninov considered his choral symphony ‘The Bells’ as the finest of all his works and yet performances of it in the concert hall and on disc are quite rare. The background to this astonishing and beautiful work was given in considerable detail by my late and much missed colleague John Miller and myself in our reviews of the 2007 Profil recording by Semyon Bychkov and the WDR Symphony Orchestra version, so does not need repeating here. Rachmaninov: The Bells, Symphonic Dances - Bychkov.

Feltz’s account is extremely well paced and he shows admirable control over his large forces. Comparison with the Bychkov version reveals no great differences in their overall approach to the work. Feltz, like Bychkov, elicts wonderfully sensitive playing from his Dortmund orchestra in the second movement (Lento) and I marginally prefer his flowing tempo to Bychkov’s more measured one here. In the scherzo (Presto) that follows, both conductors drive the music forward to thrilling effect, but thanks to his urgent tempo, superb playing from the WDR Symphony Orchestra and more incisive attack from the chorus, Bychkov provides just that extra frisson. Honours are equally divided between the three soloists though the fine bass Luke Stoker for Feltz is much to be preferred to Bychkov’s rather coarse Vladimir Vaneev.

Neither version provides the sung texts (inexcusable for a choral piece), but at least Dreyer Gaido does reproduce the text of the 1849 Edgar Allan Poe poem which was the inspiration for Rachmaninov’s composition.

The recorded sound on the Dreyer Gaido SACD is natural rather than spectacular with a convincing concert hall perspective and soloists less forwardly balanced than for Bychkov. On balance though, the more vivid recording and crisper playing from the WDR Symphony on the Profil version makes that the one to have.

The other work on this disc is is most welcome as it is the first recording in hi-res of Respighi’s Orchestration of five of Rachmaninov’s Études-Tableaux.

In 1930 Rachmaninov received a proposal from Serge Koussevitzky that Ottorino Respighi be commissioned to orchestrate some of Rachmaninov’s solo piano pieces. Upon hearing of the commission, Rachmaninov enthusiastically embraced the idea and contacted Respighi to select the works to be orchestrated and discuss the character of each of the pieces with him. Rachmaninov’s selections for orchestration were from his two sets of Études-Tableaux, Opus 33 and 39 from which he chose five pieces. These were: No. 4 from Opus 33, and, Nos. 2, 6, 7 and 9 from Opus 39. Rachmaninov’s usual reluctance to reveal any extra-musical program for his études was waved on this occasion and in a letter to Respighi the composer provided his programmatic intentions for each of them.

Respighi transcribed each of these études, for full orchestra with his customary brilliance and finesse. Little was changed in the structures of the original pieces. However, Respighi did change the order of the études and assigned them the programmatic titles Rachmaninov suggested in his letter: 1. The Sea and the Seagulls; 2. The Fair; 3. Funeral March; 4. Little Red Riding Hood and the Wolf; 5. March. Serge Koussevitzky conducted the Boston Symphony Orchestra for the premiere performance of Respighi’s orchestration on November 30, 1931.

Feltz and his orchestra give a splendid and characterful account of these pieces and the playing has considerable panache, so those seeking this particular coupling need not hesitate. It is, however, worth noting that a new SACD of Respighi Transcriptions that includes the Five Études-Tableaux is due from BIS next month, the latest in what has been John Neschling’s outstanding Respighi survey.

The vexed question of applause comes into play in both works. There is a gap of about five seconds following the sublime ending of ‘The Bells before the audience shows their respectful appreciation of the performance, whereas after the Études-Tableaux it is only a couple of seconds. It is fair to say that only those hypersensitive to applause on recordings will be concerned.

Could be an interesting release after the reception to the first Symphony.
Never been a fan of the work but could be tempted! 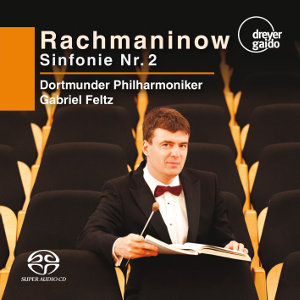 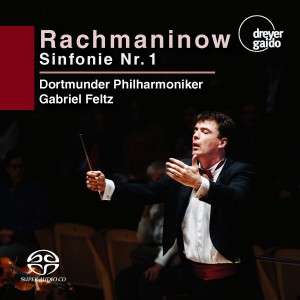 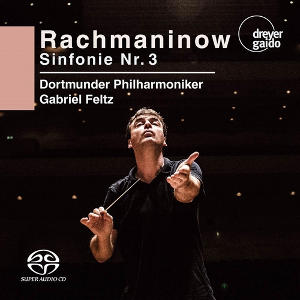