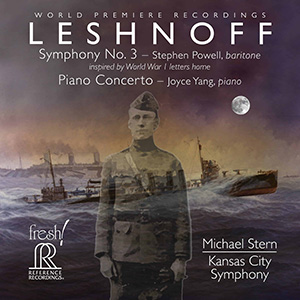 Earlier this year I reviewed a stunning release of Tchakovsky’s 4th Symphony from Reference Recordings that also included the World Premiere recording of Jonathan Leshnoff’s Double Concerto for Clarinet and Bassoon, a work that in my review I described as ‘a meticulously crafted and instantly accessible piece’ Tchaikovsky: Symphony No. 4, Leshnoff: Double Concerto for Clarinet and Bassoon - Honeck.
Subsequent auditions of this Concerto have increased my admiration for Leshnoff’s composition, so I am delighted that the label have now released a further disc of Leshnoff’s music – his Piano Concerto and Symphony No. 3 – both of which are also World Premiere recordings.

Leshnoff’s Piano Concerto came to fruition as a result of a 2017 meeting in Baltimore with the pianist Joyce Yang who was rehearsing Prokofiev’s 3rd Piano Concerto in preparation for a performance with the Baltimore Symphony Orchestra. Leshnoff and Yang collaborated on plans for a new concerto which was completed in November 2019 and dedicated to Joyce Yang. The opening of the work’s four movements presents a majestic (and attractively memorable) theme that is developed with increasing energy and dazzling pianism by soloist and orchestra in the manner of a grand romantic concerto before reaching a humorously abrupt ending. The slow movement entitled “Neshama,” Hebrew for “breathing soul”, is the spiritual heart of the concerto in which a hauntingly beautiful melody unfolds over a cushion of soft strings. The final two movements are a brief witty scherzo and a lively energetic finale, both of which allow ample opportunity for the brilliant Joyce Yang to display her virtuosity, which she does with tremendous panache, while Michael Stern and the Kansas City Symphony provide marvellously alert support.

Like the Piano Concerto Leshnoff’s Symphony No. 3 was a commission by the Kansas City Symphony, this time to commemorate the United States’ entry into World War I in 1917 and it is a powerful and gripping piece cast in three movements. The first two are purely orchestral while in the consoling finale the composer sets extracts from soldiers’ letters home during the conflict that he chose from the archives of the National World War I Museum and Memorial museum in Kansas City. The wonderful poignancy of the strings cantilena at the start of the piece gradually darkens as the movement proceeds and builds to a dramatic climax whose power is intensified by strokes played on two anvils placed on opposite sides of the stage. The second movement “Gevurah”, meaning ‘strength’, is marked ‘with burning intensity’ and the composer tells us that it is his depiction of war and battles. In this exciting section the musicians of the Kansas City Symphony relish to the full the opportunities given to them by Leshnoff’s imaginative orchestration. The reflective finale, marked ‘Calm’, follows without a pause and it would be impossible to over praise Stephen Powell’s singing of the texts. Powell is possessed of a superbly resonant and firm baritone voice that he uses with great sensitivity to communicate the pathos of the words.

Music as fastidiously composed as this warrants a recording of the highest quality and certainly receives it from the Soundmirror team of Dirk Sobotka and Mark Donahue. They have captured with unerring skill both the fine acoustic ambience of the Helzberg Hall, Kauffman Center for the Performing Arts and the superb playing of the Kansas City Symphony. Though the recording dates were May20-22, 2016 for the symphony and November 22-24, 2019 for the concerto, the three year time difference has made no discernible difference to the excellence of the sound on this 5.0 channel hybrid SACD. Balance between piano and orchestra in the concerto does slightly tend to favour the former though not to the detriment of orchestral detail and this is also the case with Stephen Powell’s splendid vocal contribution in the Symphony’s final movement.

The liner notes, as always from this label, are a model of their kind and greatly enhance the listening experience. Here they are written by the composer, who provides fascinating background information about the genesis of both works as well as succinct descriptions of their musical content and inspiration. The texts used in the final movement of the symphony are provided, as are a listing of all the K C Symphony musicians involved.

In a recent interview Leshnoff is quoted as saying “My motivation is twofold for my music. First, I want to take listeners on a journey. If I don’t take listeners somewhere, I haven’t done my job as a composer. Second, I want to integrate authentic Jewish spirituality into music and combine the two. Those, I feel, are my life mission.”

Few would doubt, on the evidence provided by this wonderful recording, that he has succeeded in both these aims and I recommend it unreservedly.