Feminae, The Female in Music - Schachtschneider 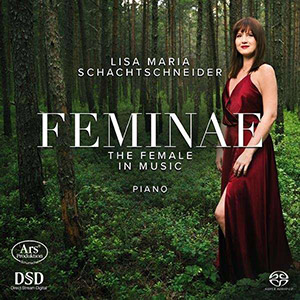 
The classical music industry is a male domain. Although there is now a lively discussion, especially in social media, about topics such as the gender pay gap, better compatibility of family and career choices for women, gender-neutral language and women networking, the classical music business is far from treating women composers and other groups equally. In 2016, a study by G. Schulz, C. Ries, and O. Zimmermann entitled “Women in Culture and Media” and sponsored by the German Cultural Council, concluded that the proportion of women among freelance composers and university faculty is low, despite the high proportion of women studying composition. Why are there so few women composers? “This question has been shamefully neglected. One must ask why thousands upon thousands of women composers are virtually unknown, because that is the crux of the matter,” wrote Susanne Wosnitzka, a German musicologist and expert on women composers, on her twitter account. There reasons for this are obvious: those responsible for the programming at festivals, radio stations and orchestras hardly ever include more than one or two works by women in their regular programmes every season for fear of scaring away audiences with unknown names. In music history textbooks, women only appear at the margins and it is difficult to find unknown female composers in the publishers’ archives and on the internet due to the lack of user-friendly structures. Women will have achieved equality in the music world only when it has become commonplace to see a female conductor step onto the podium, when works by female composers have been established on an equal footing in the concert business, and when it is not unusual for the brass section of an orchestra to largely consist of women.

Lisa Maria Schachtschneider is one of the many young talented German pianists making her debut on record with a remarkable ARS release. Apart from her attractive and enchanting playing, there is something else that catches the eye and the ear: Her personal notes and choices for this recital. A statement? Yes!

Once upon a time, women were not supposed to put aside domestic duties to devote time to composing, and certainly not anything serious. That was a man’s job. Ms. Fanny Mendelssohn-Bartholdy thought otherwise and so did Mrs. Clara Schumann-Wieck. Although living and working in the shadow of brother and husband, they showed a level of creativity equal to some and perhaps even better than many of their male contemporaries. Those of us lucky enough to have copies of, or have been able to listen to their well-crafted piano trios will, like me, regret that social convention did not allow either to come to full bloom, gracing us with major compositions (apart from Clara’s piano concerto, composed before she married Robert).

In Schachtschneider’s glowing ‘statement’ about the classical music industry letting down female composers, heroines of the romantic era could not be left out. Two not so well known piano pieces from both Clara Schumann and Fanny Hensel are included in her recital, together with a sonata by Elisabetta de Cambarini, new to me, living some decades before, though not in Italy, as her name suggests, but in England. Interestingly, her sonata has elements of both; Scarlatti and Händel.

In later years, more female composers emerged, like Ethel Smyth, Amy Beach, Rebecca Clarke, and not to forget, Nadia and Lily Boulanger. All in their own right. Schachtschneider could have chosen any of them. Instead, and possibly for reasons of limited disc space, she preferred to jump the queue to include works of our time; one written in 1990 by Tatjana Komarova (Byelorussia), and another composed in 1999 by Margrit Schenker (Switzerland).

Attitudes have changed. The list of today’s female composers is impressive. In comparison to their male colleagues, they are no longer considered to be the lesser ones ‘on the sole grounds of gender’. Despite such positive developments, Schachtschneider advances the view that a discriminatory mindset towards female composers continues to exist. In her personal notes, she refers to a recent study ‘Women in Culture and Media’ (do read the notes) drawing our attention to the inequalities between men and women and the unwillingness of programmers at festivals, radio stations, and orchestras to include more than one or two works of them “for fear of scaring away audiences with unknown names”.

Such a pessimistic view may not be common among many music lovers (when writing these lines, I listened to Mrs. Ruth Gipps’ clarinet concerto on a Flemish classical radio station!), but in spite of that one ought to respect the sincerity of Maria Schachtschneider’s views, especially in the wider context of classical music programming. Clearly not wanting to leave it at just raising the point, she states in her notes the ‘raison d’être’ of her debut recording: “FEMINAE – the female in music’ is my contribution on the way to equality”.

Given her intention, one may wonder why the final piece is a man’s work: Robert Schumann’s Carnaval Op. 9. We have to take Lisa Maria’s word for it: “In terms of gender balance, men should not be neglected either”.

Most of the programme is new and comparison therefore difficult. However, taking things at face value, Schachtschneider demonstrates to be a talented pianist getting her ideas wonderfully well across to the listener from the tenderly played Variations Op. 20, Clara’s final composition, written for her mentally subsiding husband, to the spirited modernism of Komarova. Whilst her interpretation of Schumann’s Carnaval variations is assuredly adequate, it stops short of Kirill Gerstein’s virtuosity on Myrios: Mussorgsky: Pictures at an Exhibition, Schumann: Carnaval - Gerstein.

At the end of the day, and more than anything else, the major value of this recording lies in Lisa Maria Schachtschneider’s plea for genuine gender equality in concert programming. A noble objective, which I support wholeheartedly for as much as it is still necessary in an evolving musical environment. Finishing on an optimistic note, Frau Schachtschneider may hope that with the recent advent of female conductors at the helm of prestigious symphony orchestras, a change for the better may not be too far away.

The ARS engineers have put much emphasis on the surround. Some like it, but for me, it is un-natural to hear (almost) as much piano sound from the surround as from the front speakers. No problem for the many stereo fans, though.

So there is more of the piano in the surrounds than there is up front? Unusual maybe but not a problem for me, indeed it makes it a must buy.