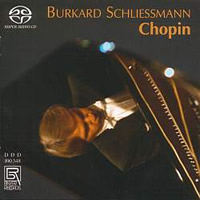 Chopin was a virtuoso, like Liszt and Thalberg, and it is a known fact that most of his recitals were improvised. Also, he never played the same piece twice the same way. So, one can argue, there is no standardized way his music should be played. There is room for own judgment. Listen to the romantic pianists of the past century, Rubinstein included. They even added or changed what they thought appropriate at the very moment they were playing (as Chopin did!).

Back to Schliessmann. In answer to some not so very nice comments on this site, I do agree that the first ballad is slow, but I do not think that it is too slow, nor that the pauses are misjudged. Mr. Burkard Schliessmann's playing is a very personal one and what is wrong with that. Even if you do not like it, it doesn’t mean that it is altogether bad. In the past virtuosi were able to develop their own style.

What we see these days, is that more and more musicians, under the influence of ‘authoritative critics’, copy one another’s style of playing until it becomes the accepted way of performing a particular piece. This is perhaps one of the downsides of the general availability of recorded material.

From then onwards trends (or ‘fashion’) could only be changed if someone is willing or daring to stick out his or her neck. Take for instance Harnoncourt. His first performance of the Saint Matthew Passion in the second half of the last century was regarded as totally unacceptable: much too fast and too little drama! Now it is commonplace. Nowadays some highly regarded authentic bands go even further; they race through the fast parts like ‘I can play faster than you’. Matter of taste. Some love it some don’t. But no reason to kill any one of them. Let there be difference. Another noteworthy example? Olli Mustonen’s Beethoven concertos. I admire his courage! Self-indulgent? I don’t think so. For me, this is what artistry is all about.

If one compares music with wine: We in France are not so fond of Parker’s Wine Guide. For stars, and thus commercial reasons, winemakers feel forced to live up to Parker’s taste. Gone are many of the Châteaux particularities. The ‘advantage’, of course, is: You taste one and you know them all. This is not my idea, my mood differs from time to time, and so does my taste. I love choice.

By the way: Both Luganski and Badura-Skoda, to name but a few totally different examples, do the third ballad in 7:30/7:08 against Schliessmann’s 7:23, and in the forth the difference between Luganski and Schliessmann is only 15 seconds! But again, this is not a good yardstick for musical value.

This said, one must nonetheless conclude that Schliessmann's Chopin does not have the flow one would have wished for and it would not be my first choice either. The recorded sound is good though, and the liner notes are of particular interest. 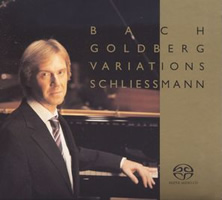 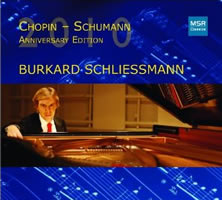 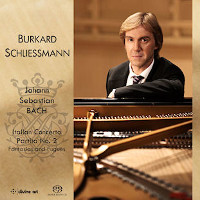 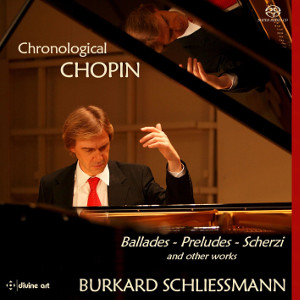