Julian Gembalski plays the organ of the St. Andrew the Apostle Minor Basilica in Olkusz.

‘We do not make assembly-line-like recordings. Each recording ending up being issued is treated as a piece of art, not as a purely commercial product’.

Musicon’s laudable aim is to promote the most valuable Polish music culture that commercially-minded recording companies would not consider promoting. Their use of state-of-the-art recording equipment and techniques, such as the best Schoeps microphones (including the KFM 6 sphere microphone) and the SADiE 24-bit recording and editing techniques, should ensure that their endeavours will commend themselves to those who visit HRAudio.net.

The first volume of ‘Ars Organi Poloniae’ (Art of Polish Organs) appeared in 2014 and, together with a further clutch of three organ discs, was favourably reviewed by the late John Miller in 2017.

For the second release in this series Julian Gembalski one of Poland’s most distinguished organists has assembled a varied and fascinating programme of music from the 16th and 17th centuries that illustrate the unique sound qualities of the organ in the church of St. Andrew the Apostle in Olkusz, a small town in southern Poland.

The Cracow Organ Tablature from 1548 is the source of four pieces by Nicolaus Cracoviensis, one of the oldest Polish composers, that opens Gembalski’s recital. These are followed by three anonymous pieces from the same source. The original of the Tablature was lost during the 2nd World War, but fortunately a microfilm made earlier ensured its preservation.

The Oliwa Organ Tablature of 1619 is represented here by ‘Deus in adjutorium meum’ by the 16th century composer Piotr Drusiński. Hymns from composers, probably familiar to organ aficionados, such as Paul Hofhaimer, Christian Erbach, Girolamo Cavazzoni and Michelangelo Rossi follow, and provide a wealth of varied musical enjoyment while Girolamo Frescobaldi, represented here by three Toccatas and his ‘Canzona III in sol’, provides the link between the late Renaissance and early Baroque periods. One small error on the sleeve gives the timing of Frescobaldi’s majestic ‘Toccata prima ‘(track 17) as 1.52 when it is in fact 4.45.

This is joyous music and Gembalski’s imaginative performances ensure that one’s attention is held throughout the disc. Many of the pieces are quite short in duration so one can happily play the whole programme (22 tracks) in one sitting without any onset of aural fatigue.

Production values are very high on this release. The SACD is housed in the right hand section of a triple cardboard sleeve. The left hand section holds a lavish 40 page booklet in Polish and English that contains detailed notes on the music by Marta Szoka, as well as a fascinating history of the organ by Krzysztof Urbaniak who led the team responsible for the restoration of the instrument. Perusing a number of the beautiful full colour photographs taken inside the Basilica while auditioning this disc enhances the musical experience.

The recording was made in November 2019 and the sound quality of this hybrid SACD (24 bit /192kHz) in both stereo and 5.0 multi-channel is exceptionally vivid, providing an impressively realistic representation of both the fine instrument and the warm ambience of the Basilica.

A release, such as this, from a small independent company could easily be overlooked among the plethora of recordings appearing every month, but |I would urge even those for whom organ music is predominantly outside their main sphere of interest to investigate this beautiful production and be miraculously transported back 400 years.

An unqualified recommendation is deserved. 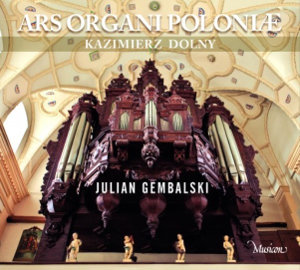