Described as ‘easily the classiest brass ensemble in Britain’ by BBC Music Magazine, Onyx Brass continues to be the leading light in establishing the brass quintet as a medium for serious chamber music, presenting it in the entertaining and articulate style that has become the group’s trademark. For this, its third recording for Chandos, Onyx Brass presents a programme steeped in the German romantic tradition. Arrangements for small ensemble of works by Schumann, Brahms, Mendelssohn, Rubinstein, and Franz demonstrate the musicality and virtuosity of the group, as well as a wide expressive and textural range. The programme opens and closes with three large-scale works by Richard Strauss, in which the quintet is joined by a host of other top UK brass players and the conductor John Wilson. Festmusik der Stadt Wien for brass and timpani, written for the city of Vienna, is the only original composition: all the others are arrangements made by members of the group. Captured in Surround Sound and available as a hybrid SACD, this is a must have album for brass music enthusiasts and fans of chamber music alike.

Lovers of virtuoso brass playing will relish this latest arresting and sumptuously recorded SACD from the five members of Onyx Brass and their guests, who are amongst the foremost players from the brass sections of the top orchestras in the UK.

The Festmusik of the disc’s title is Richard Strauss’s magnificent ‘Festmusik der Stadt Wien’ that he composed in 1943 for the The Viennese Corps of Trumpeters, a body comprising members of the Vienna Philharmonic, the Vienna Symphony and the Vienna Volksoper orchestras. The work is scored for 10 trumpets, 2 alto trombones, 3 tenor trombones, 2 bass trombones, 2 tubas and timpani. Though only lasting around 11 minutes it is one of the composer’s most brilliant compositions and would be more frequently heard were it not for the practical difficulties of performing it. Here, the performers, expertly directed by John Wilson, make light of all its technical challenges and rhythmic complexities. Aided by the Chandos superb multi-channel recording made in the Church of St. Augustine, Kilburn, London in October 2020 it comes across as one of Strauss’s finest late works.

Though the Festmusik is the only original composition on this SACD, the Onyx brass tuba player David-Gordon Shute has arranged Strauss’s ‘Zwei Gesänge’ Op 34 – written in 1897 for 16-part mixed choir – for a similar but equally opulent line-up of players. Four of the trumpets and the timpani are dispensed with, but two horns and two flugelhorns join the ensemble. Strauss was unsparing in the vocal challenges he presented to the singers which is why these wonderful pieces (lasting in total around 22min.) are rarely performed and only by the finest professional choirs. Shute’s arrangement was obviously a labour of love and it perfectly captures the richness and soaring radiance of the original.

The remaining arrangements on this disc of music by Schumann, Brahms, Mendelssohn, Rubinstein, and Franz are entrusted to Onyx brass alone and though at first glance they seem to be a disparate collection, this proves to be far from the case as becomes clear when reading David-Gordon Shute’s fascinating and poignant story of his ‘legacy’ given in the liner notes – briefly summarised below.

His Great-uncle, Heinz, his wife Hilde and her sister (David’s grandmother) fled from Nazi Germany in 1935 to the UK. Following Heinz’s death in 1996, David’s grandmother gave him an envelope that contained letters from eminent 19th century composers with a connection to Berlin.
Also included was a postcard written by Richard Strauss and even a calling card from Brahms!
Thus each of the pieces performed here have a direct connection with these letters.

The remarkable capabilities of Onyx Brass are displayed to the full in these imaginative arrangements. I particularly enjoyed that of Schumann’s ingenious 20 minute ‘Impromptus on a Theme by Clara Wieck’ but the shorter pieces are equally enjoyable. 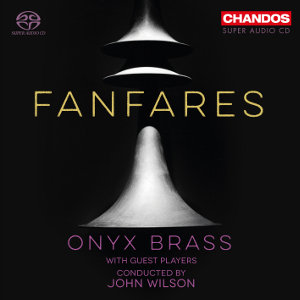