The Matrix: The Complete Score (OST) 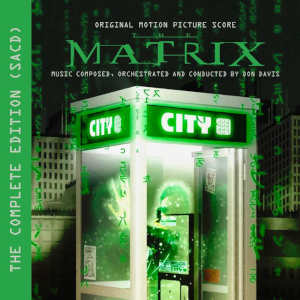 
The Complete Edition Matrix soundtrack comes on two Hybrid SA-CDs (Super Audio CDs). These Hybrid SA-CD’s contain a CD layer that can be played on any CD player, and a hi-resolution SA-CD layer that contains DSD audio in stereo and surround versions. The audio on the SA-CD layer has been upsampled from 48 thousand samples per second 24bit PCM audio to 2.8 million samples per second 1 bit DSD audio. When these disks are inserted into an SA-CD player or a Blu-Ray player that can play SA-CD’s, you will hear up-converted hi-resolution DSD audio in stereo or surround and realize the sonic enhancement that comes from the up-conversion.

Few blockbusters can claim to be as influential as The Matrix (1999), written and directed by the Wachowskis. From its super high-concept that has wormed its way into the public’s imagination (what if we’re all just living in a computer simulation?), to Keanu Reeves’ iconic hero Neo, to the brilliant, jaw-dropping and story-based visual effects, The Matrix delivered on all fronts. Its three films grossed over $1.6 billion worldwide, and a fourth is on the way.

The Matrix demanded a score that was as unique, sophisticated and imaginative as its concept and action—and got one from composer Don Davis. Davis, who scored the Wachowskis’ Bound (1996), reinvented the symphonic language of the action blockbuster by drawing on cutting-edge concert-hall minimalism and his own background as an avant-garde composer, while maintaining the energy, pace and density required of a studio action film.

From the clashing-brass “reflections,” to the racing strings, pounding percussion and flittering, repeating musical “cells,” the Matrix score fits hand-in-glove with the film’s concept of a computer-controlled reality—and offers a unique musical thumbprint that is recognizable sometimes only from a single note or chord. It is the rare commercial triumph that is also an artistic landmark.

The Matrix was released by Varèse Sarabande at the time of the film, and then in a Deluxe Edition that fit as much of the score as possible on one CD. By popular demand, this new 2-5.1 SA-CD set, (also available for Record Store Day as a 3LP set), presents the complete score. Liner notes feature a new interview with Don Davis conducted by Kaya Savas.

Received my copy today. I have not had time to listen to it all yet, and I compared some cues to their equivalent in the redbook edition from Varèse (Deluxe edition). Since I do not own a multichannel setup, I will only be listening to the stereo layer. To me this release is a mixed bag.

First thing to notice, despite being two discs we get only 20 mins of additional music in this edition because several tracks are quite short.
The sonics are indeed improved a bit here and there, though it is not that noticeable. Mostly dynamics and a less extricated soundstage in the tutti. You should not expect to be blown away by possible details the redbook incarnation could not give you. And this is perhaps my biggest disappointment. Davis orchestration has a lot of different textures I hoped this reissue would bring up, which it did only in a subtle way. I remember being amazed at other remasterings such as the recent Star Wars reissues on 24bits-192Khz.

Since I own a copy of the previous Deluxe Edition from Varèse, this release offered little value (especially since I have no use for multichannel yet). However, if you do not own it and want an extensive Matrix soundtrack this release is a must.

I've got this and have listened in MCH. As the score is orchestral (there are no synths credited in the list of players), it's a conventional presentation with the orchestra positioned in front of the listener albeit positioned much closer than normal if judged by the standards of BIS, PentaTone et al. The only explicit criticism I'd make is that the dynamic range is rather narrow, which minimises the impact of the musical climaxes (partly this stems from the podium, partly the mixing desk if my ears are correct).

The electronic music (e.g. in the night club, Neo flying off in the final scene) is omitted from this set, I think because it wasn't written by Don Davis.

Listening to the score without pictures/sfx highlights its extensive use of minimalism. A wonderful & inventive score that is a perfect match for a film possessing the same qualities.

John, though it will not invalidate your point I tend to remember hearing synth in several tracks. Synthetyzers presence is also acknowledged by the fact that a dedicated recording ingeneer is listed as well as the studio where they were recorded. Yet you are very right in pointing out their performer(s) are excluded from the musicians list, which differs a bit from the list provided in the Deluxe set.

I used to love the original soundtrack, though haven't listened to it in ages. I wanted to get it, but it's so expensive! Maybe I missed the initial release and now it's all just resale? Boo!

Edit: Looked it up on eBay and there are far more reasonable prices than on Amazon. Will get it.