There are many who say this album is "more natural" or "closer to the intended sound" in mono, because of the old-school mixing of this album's stereo variant - and I fully ... 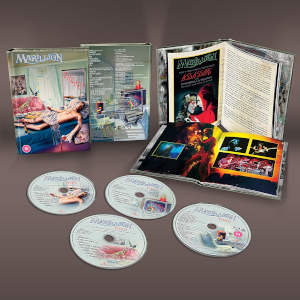 Disc One features a brand new stereo remix of the album by Andy Bradfield & Avril Mackintosh.

Discs Two and Three feature the concert from Le Spectrum, Montreal, Canada on 20th June 1984. Parts of this show were used for the live album Real To Reel, however this is the first time the show has been released in full.

The blu-ray contains 96k/24-bit audio of the album and the Montreal show. It also includes a 5.1 surround mix of the album by Andy Bradfield & Avril Mackintosh.

Video content consists of "The Performance Has Just Begun" - a new in depth 70 minute documentary covering the making of the album.

Also included is a "The Story Of The Songs" track by track analysis of the album by the band, the "Here We Go" live appearance from Swiss TV in 1984 (7 tracks + backstage interview) and the Assassing promotional video.