These late 1970s recordings vastly benefit from the new EBS remastering. I'd like to draw attention to the new remix, which leads in turn to some remarkable changes regarding ...

These performances have a vibrancy, joy and sense of fun that is too often far removed from chamber music performances - I think Haydn himself would have cracked a smile. The ... 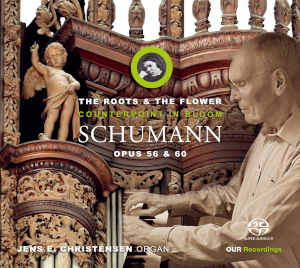 
Although Robert Schumann’s public role in the Bach revival is less wellknown than that of Felix Mendelssohn, Bach’s music would play an influential effect throughout his life. Schumann would in turn, arrange and perform many of Bach’s works including adding piano parts to the Solo Violin Sonatas and Cellos Suites and trumpets to the St. John Passion!

In 1843 he and Clara rented a custom made pedalflügel - a dreadnought of an instrument combining a Friedrich Wieck grand piano with a pedal keyboard that enabled Schumann’s to play Bach’s organ music at home. During one of his periodic bouts of depression, Schumann became gripped by what he called Fugenpassion and shortly thereafter his obsession with Bach would blossom in the Canons and Fugues of Opp. 56 and 58.

The curious name of this album references Carl Nielsen’s advice to fellow composer Ture Rangström, namely, to get down to the roots of a piece so that it would truly flower. And so following Nielsen’s advice, acclaimed organist Jens E. Christensen, a master of styles ancient and modern, dug deep to uncover the roots of Schumann’s imagination for this truly extraordinary program, a lovingly cultivated German-Danish, Piano-Organ, Baroque-Romantic hybrid, that will no doubt become a perennial favorite for fans of Schumann’s most florid contrapuntal creations.