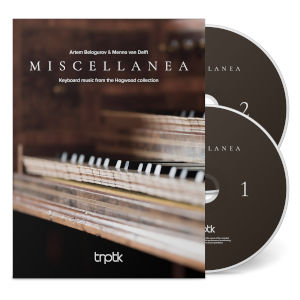 
AN INTIMATE GLANCE INTO THE MUSICAL LIFE OF THE 18TH CENTURY

Just imagine, being asked whether you would be interested in a pile of copies of scores left over from the extensive collection of the legendary Christopher Hogwood (1941-2014), one of the British pioneers of the Early Music movement. This happened to harpsichordist Menno van Delft who, together with Artem Belogurov, one of his former Master students, worked through no less than twelve large boxes of historical material: a true voyage of discovery!

Working closely together, Belogurov and Van Delft brought order to the extensive collection. They also made a preliminary selection of works they wanted to perform, in which all possible combinations were imaginable, from solo to six-handed! But also a four-handed fugue for organ or a combination of harpsichord and fortepiano were among the possibilities.

The adventurous TRPTK label immediately expressed its interest in a recording project. Amerongen Castle was chosen as the location, a place that breathes music with its collection of historical instruments. Van Delft: "The music hall has fantastic acoustics and the residents were extremely hospitable. We were allowed to record there every evening for a fortnight, after the tours during the day. We really lived there." Belogurov: "I was completely in love with the rare Kirkman harpsichord they have there, a beautiful instrument."

Inspired recordings were made in this inviting atmosphere, with WA Mozart's 'Sonata pour deux clavecins ou piano-forte in D Major, KV 448' given a performance on fortepiano and harpsichord for the first time. A discovery for Van Delft is the oeuvre of Siegfried Schmiedt (c1756-1799), who is represented with his 'Fantasia in A Minor' and 'Sonata No. 4. He also finds the 'Vivace' from the 'Concerto in E Major' by Hirich Conrad Kreising (c1700-1771) masterly. Belogurov mentions the 'Sonata No. 2, Op.2' by Georg Simon Löhlein (1725-1781) and the 'Sonata per Gravicembalo Solo in C Major, Op. 15' by Gottfried Weber (1779-1839). A curiosity is the 'Sonata No.1' by Christian Friedrich Gottlieb Schwenke (1767-1822), who extensively quotes from the aforementioned sonata by WA Mozart. The 3-SACD box set* 'MISCELLANEA' contains no less than 21 compositions. Rarely has a more penetrating look been offered into the keyboard music of the 18th century, with various well-known, lesser-known and forgotten musical masters.

Naturally, the beautiful edition is provided with extensive liner notes. And Belogurov and Van Delft tell us: perhaps we will be releasing more material from the Hogwood collection in the near future.