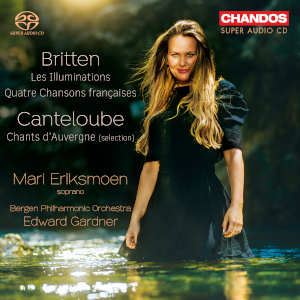 
Following successful appearances at the Opéra-comique, in Paris, Grand Théâtre de Genève, Oper Frankfurt, Komische Oper Berlin, and Teatro alla Scala, in Milan, the Norwegian soprano Mari Eriksmoen is undoubtedly a rising star. On the concert stage she has made important recent appearances with the Orchestre de Paris, Berliner Philharmoniker, Oslo Philharmonic, and Münchner Philharmoniker, among others. Here she joins the Bergen Philharmonic Orchestra and Edward Gardner for a powerful album of orchestral songs, coupling Britten’s Les Illuminations and Four French Songs with a selection of Canteloube’s inimitable Songs of the Auvergne. Eriksmoen spent a year studying in Paris, and proves an effective and natural singer in the French language. As she mentions in her programme note: ‘It is highly demanding to sing in French when it is not one’s native tongue, but I have always felt at home when singing in French and nurture an emotional attachment to the French language.’

It has been a very long time since a new recording of this beautiful song cycle was issued and now we are offered not one but two - the other on BIS.

Both versions face the almost impossible challenge of matching the beautifully seductive Vanguard recording by Netania Davrath which was and remains an emotional and technical tour-de-force. Neither of these new recordings are in DSD so my instinct is to stay with Davrath so I will defer to other opinions. I hope Adrian is able to review these discs.

In fairness to Mari Eriksmoen and Chandos, this is not first and foremost a Canteloube recital. It is a recital of songs set to French texts, and for me the highlight of it is her ravishing performance of Britten's Les Illuminations - to my senior ears the finest performance since Heather Harper and Neville Marriner for HMV back in the '70's. Britten's little set of Chansons Francaises which I had not come across before are every bit as well done. Her set of the Canteloube songs is of course a much smaller choice then the other sets and is inevitably quite different to Davrath who very much ploughs her own furrow in this music, it seems to me. I'm no expert in all this but, as with wine, I know what I like and this disc adds to a generous number of wonderful SACD releases we have been treated to in 2021. Highly recommended by me, anyway!

The (probably hard to obtain) Canteloube: Chants d'Auvergne - Gens, Casadesus, is worth a listen but I will probably dip my toe into both this and the new BIS releases.

It is John! I have this Naxos recording as well as the Vanguard disc listed above. On balance Netania Davrath tugs a little more at my heart strings.

There seems to have been a consensus view on the old SA-CD.net site that those early Naxos SACD recordings were not very good but that certainly was not my experience. I loved them and still do. In my experience they were some of the best recordings of their time and still hold their own even now. What a great pity they withdrew their support of SACD. Had they kept some skin in the game the history of SACD could have been so much different.

It seems that Naxos contracted the Sony engineers to make these recordings and the likelihood is that they were recorded in DSD although it doesn't say so in the booklets.

As Veronique Gens is from the Auvergne region,she,if anybody can, give the songs the most accurate interpretation.
At least she in not Norwegian singing in a foreign language.
The recording was by Mike Clements who has a good track record as shown by this recording.
Lovely and warm and well focused.

Well I do really enjoy Veronique Gens' performance, but I really no longer accept the idea that if one was not born in the (whatever) region, one's performance cannot compare to that of a native.

Absolutely - I'm not sure that I believe I've just read such a comment on a forum like this. I wonder how much recorded and performed classical music has just been swept into the trash can at the drop of a hat?

Don't jump to conclusions guys.
She may start with an advantage but that doesn't automatically nix others from wherever they come.
She may give the most accurate interpretation, not only.

It’s a great challenge for Miss Eriksmoen but it is a great one for a French singer too.

These songs are not written in French language but in « Auvergnat » the dialect of this French region (center of the country).

English text
When the shepherdess goes to the fields
To look after her little sheeps
She meets a fine gentleman
The gentleman looks at her.
Etc

As a French native, I can tell you I don’t understand 90% of the Auvergnat text :-)

Nota : the Naxos release is very well recorded with 21 songs.

Thank you Dominique for your amazingly informative comment. Fascinating stuff.

A final thought to add a context to all of this as this discussion started with hiredfox sharing his love (like many others) for Davrath's classic recording. Davrath was Ukrainian by birth, moved to Israel with her family in her teens and later studied in Dusseldorf, Italy and at Juillard. Crucially, perhaps, she was fluent in eight languages. (I have Wikipedia to thank for all of this!) So perhaps Eriksmoen, Sampson, de los Angeles et al are after all worthy of our consideration purely on the basis of their interpretations?