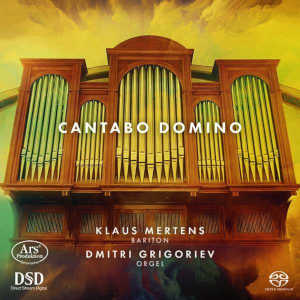 For me, Klaus Mertens is a cornerstone in the field of historically informed cantata singing, and with me no doubt many more. But with his versatility, his breath went a whole mile further. My shelves bearing witness. Now that he is at the mature end of his career, I was pleasantly surprised to hear that he has lost nothing of his power and, most importantly, the convincing intonation of his recite. It reminded me of his so dramatically sung Kindertotenlieder, recorded 7 years ago by NCA (Mahler: Lieder Cycles arranged for Chamber Ensemble - Klaus Mertens).

Going back to his first love, he has now recorded with ARS Produktion an anthology of church music of the Baroque era, starting as early as Alessandro Grandi’s ‘Cantabo Domino’, followed by highlights of the classical repertoire, ending with Max Reger’s ‘Zwei geistliche Lieder’ Op. 115. Altogether three centuries of religious chant. A choice, or rather, a project, described in detail in the liner notes.

The recording was made in the Spring of 2021 at the height of the Covid-19 pandemic in the Erlöserkirche zu Lüdenscheid with Dmitri Grigoriev playing the new ‘Altstadt-Orgel’, with no other audience present than the recording team. With the pandemic drawing now to its end, I do hope that Klaus Mertens's voice will continue to enthrall the musical world for at least another couple of years.

Listening to the tracks, I noted that organ and voice were so perfectly matched. Reading Grigoriev’s notes about the organ, it became clear to me that the organ builders had taken care of the size of the church. Build as a symphonic organ along the lines of the French organ builder Cavaillé-Coll, every effort was made by Alfred Baumhoer to adapt the piano/pianissimo to the modest acoustics of the church.

The warm sound of the organ and the radiating voice of Mertens make this release a wonderful addition to the other 200 or so recordings already under Mertens’ belt, with the advantage, however, that this one is in high resolution and offering a phenomenal churchly presence.