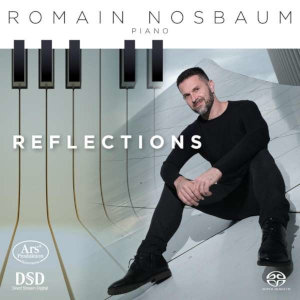 Bach: Partita No. 6
Ravel: Miroirs
Cage: In a Landscape

The secret of playing Bach lies, so it seems, in the fact that if it sounds easy - which, of course, it by no means is - the player meets the required qualifications. Listening to Roman Nosbaum playing Bach’s Partita BWV 830, my first and - subsequently - final impression was: ‘He’s got it’. Well-chosen, relaxed speeds, meticulously accentuated, yet never trying to impress. It sounded as though he was playing for his own pleasure, creating an atmosphere of sheer delight. Isn’t that how Bach's Partitas should be played? I, at least, do think so. Bach’s keyboard music ought to convey reflection rather than pushing a statement. Or, in the words of Herr Nosbaum: must communicate “innere Besinnung”.

Playing Ravel, Nosbaum portrays different kinds of ‘reflection’: These are the composer’s impressions and visions of nature acting like a mirror on which his scores are based. With a light toucher, Nosbaum carefully paints the various emotions as, indeed, reflected by the five movements of ‘Miroirs’.

In the first movement, Nosbaum’s ten fingers turn the 'Noctuelles' into a sparkle of twenty. And with his considerate style, ‘Les Oiseaux’ clearly show their tristesse. The following movements, too, unfold precisely according to Ravel’s markings. A painter could not have done it more brilliantly. Rosbaum’s Ravel is true to type, which is remarkable after having pictured Bach so convincingly.

Multitasking may be a sign of our time, but in my view, artists do not function as though they merely are a quad-core processor in a computer. We must assume that they have to ‘live’ through the different emotions of each. And if Cage’s Landscape is interpreted as though it has always been one of Nosbaum’s specialties, then we must conclude that he is a ‘jack of all trades’, or, more nicely put, a pianist who can live in different worlds with equal passion. Isn’t that wonderful?