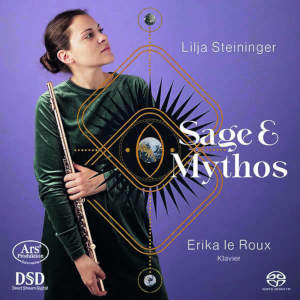 Under the title « Sage & Mythos » the German flautist, Lilja Steiniger, treats the listener to a programme that she characterizes as “Mystical Stories”. One thing, however, is clear: Her playing is not at all ‘mystical’, she brings pure delight to flute addicts and open-minded audiences alike.

The “Mystical stories, legendary characters, elves, demons, and mystical characters” serve as a ‘trait d’union’ between the compositions she has chosen for this recording. Each having some of these aspects in the score. For people with the right play-back equipment an abundant harvest.

Having done so, she adds to the High-Resolution catalogue thus far not available pieces, notably Friedrich Kuhlau’s Introduction and Variations on a theme of Carl Maria von Weber’s Euryanthe, Paul Taffanel’s Fantasy on Weber’s other Opera, Der Freischütz, and François Borne's jewel: Ballade et dance des lutins. Except for Brett Dean’s ‘Demons’, composed as recently as 2004, all works are firmly rooted in the Romantic Era.

Lilja is one of the young and coming generation having already earned her accolades at home and abroad. And with 28 she is a solo flute in one of Germany’s larger Provincial Orchestras (132 on the payroll): The Dusseldorf Philharmonic, once Schumann’s home turf and now directed by Adam Fischer. I do not know what kind of flute she plays, but she does deliver a remarkable silvery sound with an undeniable virtuosity. That said, she is, at least in this recording, not one that prefers brilliance over musicality. Comparing her reading of Carl Reinecke’s Sonata for flute and piano ‘Undine’ with that of Sharon Bezaly (BIS) Lilja Steiniger takes more time to create her vision of the Water Spirit, carefully changing moods from love to hate.

This release is not just about Ilja. Where would she be without the faithful support of South African-born pianist, Erika Leroux, with a clear natural talent of an accompanist, something that requires restraint and encouragement at the same time. The bed on which a flower can bloom.