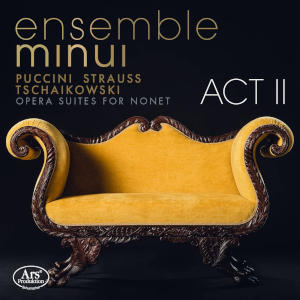 Ensemble Minui continues to produce new Nonets for personal use. Like in their previous release, (Opera Suites for Nonet: Act I - Ensemble Minui) inspiration was sourced from popular operas, transcribing and arranging capita selecta into Suites for Nine Players. Hence not Vol. but Act II is the name of the game. This time Stefan Potzmann explores Puccini (La Boheme), Strauss (Elektra) and Tchaikovsky (Eugen Onegin).

If this is your cup of tea and immersive surround your thing, then you shouldn’t hesitate. If, on the other hand, you miss the context of the drama and the thrill of the singing, you may want to abstain albeit you will miss out on the sensation of superb playing as well.

But why not, for once, look at it from another angle. Opera is more than music. It is theatre as well. To be seen and to be heard. A recording skips much of the theatrical bits. But what's left is all the instrumental beauty and its dramatic impact. If despite all this, opera lovers remain having their doubts, they should, and most probably would, appreciate that other niner groups, wanting to enlarge their repertoire, may be very pleased indeed.

The only thing none of the listeners will see is the obvious pleasure with which these soloists of the local Carinthian Symphony Orchestra, Klagenfurt, Austria, must have had in recording the music with such supportive sound engineers like Martin Rust and Manfred Schumacher. And for those who do not want to sit in the middle, there is the simple solution of lowering the volume of the surround or moving closer to the front speakers.

Like the first release, this one, too, has been heavenly (sorry, Freudian slip) crowdfunded as can be seen from the three pages at the end of the informative booklet. Bravo to all those supporters without whom we would have one desirable album less! 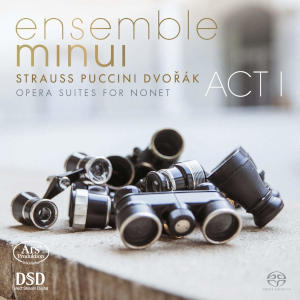