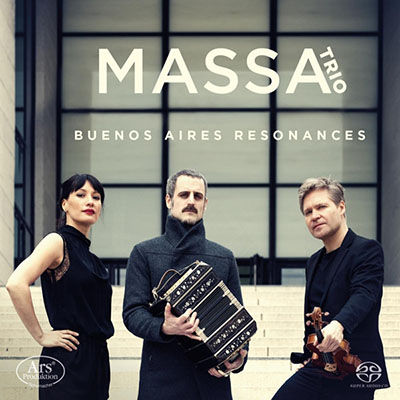 Lovers of Latin American music will find some interesting things to discover in this release.

Argentinian-born Omar Massa, who is also the mastermind in Tango Concertante, Vol. 1 - ardeTrio, continues to bring the Tango into the 21st century with his own and fellow countryman, Astor Piazzolla’s compositions, plus a more classical Danza by another famous Argentinian composer, Alberto Ginastera. For this recording, Massa is accompanied by his ‘arde trio’ colleague musician, Markus Däunert, playing his Christoph Götting violin, and with Bechstein soloist, Kim Barnier at the Grand.

With such eminent artists (Markus is inter alia a founding member of the Lucerne Festival Orchestra and Kim is among many other things a member of the ‘Berlin Piano Quartet’) even the most demanding listener won’t be disappointed. It may be clear, however, that some of the music, and notably Massa’s input, is tantalizingly new and may for some be too far away from what one usually associates with a tango.

This also raises the question of whether or not we are dealing with Classical Music. For me, difficult to answer. It is not what is generally understood to be ‘crossover’. I rather see it as music in its own right and, as far as Massa is concerned, geared to refresh and renew the classical model. Hence of particular interest to all those having a crush on the king of Latin American dance, and related music from Buenos Aires.

The extensive liner notes give full details of each of the works. So, there is no need for me to elaborate on that. Listeners should nonetheless be aware that not all is easy on the ears. Although Massa, in his personal note believes that “Tango is a form of meditation”, some of his dances may arouse powerful emotion. But that is all part of the discovery trip, though I take it that for insiders Piazzolla and Ginastera are familiar ground.

As said, the artists are of a high calibre indeed. And it is only because of them that Massa’s new and searching compositions come to bloom.

All of it was captured by Manfred Schumacher in Ars Produktion’s notably fine resolution in full (!) surround. Why not try it out?