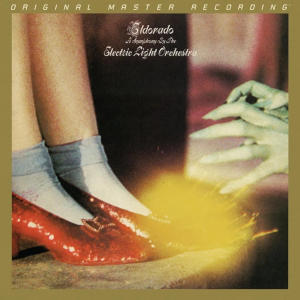 
Electric Light Orchestra leader Jeff Lynne did more than figuratively reach for the sky on Eldorado. Daring to be bold, and creating imaginative worlds that invite the listener to escape the mundane, the visionary composer-musician achieved a multidisciplinary fantasia and, in the process, a prog-rock landmark. Nearly 50 years later, the concept album's brilliance can be experienced like never before in cinematic fashion.

Mastered from the original analog master tapes, Mobile Fidelity's numbered-edition hybrid SACD of Eldorado allows the longtime audiophile staple to resonate with previously unheard dynamics, tones, and colors. Conjuring the feeling of journeying to different horizons, the record's songs teem with layer upon layer of details, which can now be heard as the producers intended.

Presenting the album with breathtaking clarity yet retaining the warmth, texture, and emotion that differentiate live music from reproduced sounds, this collectible reissue features reference-quality levels of in-the-moment presence, grand-scale soundstaging, and instrumental balance. Bursting with a veritable cornucopia of stimuli, MoFi's Eldorado SACD also benefits from superb separation and immersive atmospherics that stem from the meticulous remastering process.

An artistic breakthrough that established Electric Light Orchestra as a pioneering band (and confirmed Lynne as the leading practicing Beatles disciple), the 1974 effort remains notable for its involvement of a full orchestra and choral section, the range of which are captured with exquisite results on this SACD. Eldorado distinguished itself from the band's first two works not only via Lynne's sharpened songwriting but due to the hiring of an orchestra that augmented the group's three string players. Co-arranged by Lynne and conductor Louis Clark, the symphonic movements bolster the contagious fare without ever drowning it. The accents also act as transports into the varied narrative universes.

Finished as a story before Lynne put notes down on paper, Eldorado ironically owes its inspiration to Lynne's father. In response to his dad's criticisms about the band, Lynne conceived a melodic tour de force that, like The Wizard of Oz, which informs the cover art, emphasizes the power of everyday dreams and everyman heroism. It's no coincidence that the sonic journey begins with an overture punctuated by the words of a cynic who condemns "the dreamer, the unwoken fool."

Beautiful yet fun, ambitious yet consistent, Eldorado proceeds to celebrate such romantics and escapists. A Technicolor escapade marked by lush melodies, fluid crescendos, and an intoxicating blend of energetic rock and sweeping orchestral elements, the album weds rich imagery and sweeping sounds in manners that make the two inseparable. In Lynne and company's hands, reality and fantasy collide, and dissolve any dividing lines. The proof is not just in the epic production, but in the timeless (and catchy) nature of songs such as the balladic "Boy Blue," power-pop packed "Illusions in G Major," and, of course, the aptly titled hit, "Can't Get It Out of My Head."

Decades later, Eldorado doubles as the equivalent of an out of body experience, an invitation to break away from monotony whether you're listening to your Mobile Fidelity reissue on a large system or an excellent pair of headphones.

An album that has exuded a strange magic for me since the day I first heard it back in 1974. Rationally it shouldn't work, but somehow it does.

Shawn R. Britton has done an excellent job on the DSD mastering. It is a dense recording, with a lot of overdubs and it comes up remarkably well.

The average DR is at 11 and does not sound compressed. Listening being rewarded at higher volumes.

Best version I have heard, period........though to be fair, as a student my turntable budget was 'modest'.

The MoFi blurb above pretty much tells the story sonically and at no extra cost there is a booklet as well!

Downunderman: thanks for sharing your impressions of "Eldorado". My recollection of the LP is a bit fuzzy... It's great that MoFi had access to a master tape of the original stereo mix.

The recent series of MoFi rock album SACDs covers a lot of ground: ELO, Alan Parsons Project, Dire Straits, David Crosby, Elvis, the Eagles, and The Young Rascals. The David Crosby album adds to MoFi's San Francisco collection of the Grateful Dead, Jefferson Airplane, Santana and Janis Joplin. I wish MoFi could obtain original masters of the Airplane's other early albums, especially "After Bathing at Baxters" and "Crown of Creation".

I've ordered the Dead's "American Beauty" and David Crosby's "If I Can Only Remember My Name", both of which are also available as 24/192 downloads, and will post brief reviews/comparisons of the MoFi and 24/192 versions.

Thanks Mark - I very much look forward (as always) to your thoughts on Crosby. I have not played it yet and its appearance has my musings moving in the direction of hoping CSN&Y's Deja Vu gets the nod one of these days!