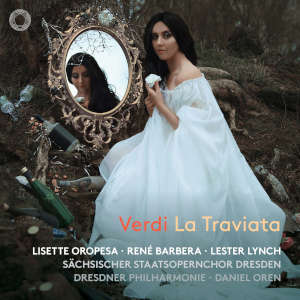 
A HEARTRENDING AND PROVOCATIVE TRAGEDY

The Dresdner Philharmonie, Sächsischer Staatsopernchor Dresden and conductor Daniel Oren present Verdi’s masterpiece La Traviata, together with a stellar cast including René Barbera as Alfredo, Lester Lynch as Germont, and world star soprano Lisette Oropesa as Violetta. Verdi’s opera from 1853 was revolutionary in the sense that it presented a subject of its own time, rather than the usual historically remote stories. Interestingly enough, this tragic story of a woman sacrificing her love to save the honour of her beloved’s family still feels as fresh and topical as ever before, explaining its unrelenting popularity. La Traviata is an endless outpour of memorable melodies with a gripping dramatic pace, as well as a tale that is both heartrending and provocative. The main soprano role gradually shifts from coloratura virtuosity to a more lyrical, dramatic idiom when the tragedy progresses, and this performance shows Oropesa’s fluency in both styles. After having sung the title role in the greatest opera houses worldwide, this studio recording captures her unparalleled interpretation for generations to come.

Star soprano Lisette Oropesa made her PENTATONE debut with Ombra Compagna; Mozart Concert Arias in 2021. Lester Lynch has a vast PENTATONE discography, including Puccini’s Madama Butterfly, La Fanciulla del West (both 2021) and Il Tabarro (2020), as well as Mascagni’s Cavalleria rusticana (2020) and Verdi’s Otello (2017). The Dresdner Philharmonie featured on those recordings of Puccini’s Il Tabarro and Mascagni’s Cavalleria rusticana, while also releasing acclaimed recordings of Beethoven’s Fidelio (2021) and Weber’s Der Freischütz (2019) on PENTATONE. Daniel Oren and René Barbera, who both enjoy a thriving career on the operatic stage, make their PENTATONE debut.