To celebrate the 150th anniversary of the birth of Vaughan Williams, we are proud to reissue this outstanding symphony cycle. Started in 1999 by Richard Hickox and the London Symphony Orchestra, this was the first Vaughan Williams symphony cycle to be recorded in Surround Sound and released on Hybrid SACD. Tragically, Richard Hickox died before he was able to complete the project – a task that was undertaken by Sir Andrew Davis and the Bergen Philharmonic Orchestra. This reissue is priced at 6 discs for the price of 2, and features almost an hour of bonus material – broadcast interviews with Sir Adrian Boult and Sir John Barbirolli, and reminiscences from both Ursula Vaughan Williams and the composer himself.

Chandos is the only label to have issued a complete cycle of the nine symphonies of Ralph Vaughan Williams in multi-channel SACD, and while many collectors will have purchased the individual releases of each symphony as they appeared, newcomers and others will welcome the opportunity to explore the set as a whole in this re-packaging at budget price (six generously filled SACDs for the price of two). An absolute bargain!

The cycle was intended to be conducted by Richard Hickox, one of the finest champions and interpreters of British music, with the London Symphony Orchestra – an orchestra that already had a close relationship with this conductor. Sadly the sudden and untimely death of Hickox in November 2008 meant that the cycle remained short of completion with just Symphonies 7 and 9 missing. Fortunately Chandos were able to call upon the services of Sir Andrew Davis (another distinguished interpreter of Vaughan Williams) to finish the project, albeit with a different orchestra (the Bergen Philharmonic).

It is perhaps worth noting that most of the original single releases contained just one symphony per disc with various other choral and orchestral works by the composer acting as fill-ups. This new box set is shorn of these additional pieces, many, though not all of which, are available elsewhere.

DISC 1
The ‘Sea Symphony’ (Symphony No.1) originates from live performances given in the Barbican in 2006 and is the only one to be recorded in DSD rather than Chandos’s customary 24bit/96kHz. With Gerald Finley’s magnificent, firm voiced singing – a baritone who really understands how to communicate Whitman’s words – and soprano Susan Gritton in radiant voice, this is a riveting account of the score. The LSO Chorus is on top form with immaculate diction and the sound quality does not disappoint even with the limitations of the Barbican acoustic. This regrettably was the last of the cycle to be conducted by Richard Hickox.

DISC 2
The ‘London Symphony’ (Symphony No.2) is performed in its original 1913 version, one that has almost twenty minutes of additional music of the highest quality that the composer excised in his later revisions. As my colleague John Broggio wrote in his enthusiastic review on this site “The orchestral playing and conducting of Hickox throughout this disc is quite beyond criticism” a view I would fully endorse. This is an essential acquisition for all Vaughan Williams aficionados and the only recording of it that has been permitted to date by the RVW Trust.

DISC 3
Two works of considerable contrast on this disc – the ‘Pastoral Symphony’ (Symphony No. 3) from 1921 and its successor Symphony No.4 that appeared some ten years later. Hickox’s tempi for the former are finely judged, avoiding any sense of sluggishness and the ample ambience of the recording venue (All Saints Church, Tooting) provides a magical glow to a performance that successfully conveys both the work’s outward tranquillity and its darker undercurrents.
Hickox’s interpretation of the 4th Symphony is one of the finest on disc. He gives a very fast and terrifyingly visceral account of the score from start to finish, revelling in the music’s violence and dissonant turbulence. The LSO is on blistering form with white-hot playing from all sections. The only downside is that the acoustic ambience of All Saints, so right for the previous work, does tend to mask some detail in the loudest passages.

DISC 4
Hickox launched his cycle in 1997 with a work of serenity (Symphony No.5) first heard in 1943 and though recorded at a comparatively low resolution the sound does not disappoint. Thanks to the marvellously eloquent playing of the LSO and Hickox’s clear direction this is a cherishable account of the score, and only a touch of glassiness in the string sound detracts from the otherwise fine recording. The coupling is the turbulent and sometimes diabolic 6th Symphony in an account that underlines Hickox’s interpretive skill in handling the extreme contrasts of mood and pace in this most challenging piece. One such example is his masterly control of dynamics in the symphony’s final Epilogue with its suggestion of a desolate and dystopian landscape.

DISC 5
As I have mentioned above, Symphonies 7 and 9 were assigned to the very capable hands of Sir Andrew Davis and the Bergen Philharmonic and, both in sonic and performance terms, are outstanding. Davis shapes the Sinfonia Antartica with unerring skill with tempi that ensure there are no longueurs in any of the work’s five movements while the wide dynamic range of the recording provides a thrilling listening experience.
The much underrated 9th Symphony is also finely delivered by Davis, with captivating playing by the Bergen orchestra throughout and notably in the slow movement from Martin Winter on the flügel-horn, considered by the composer as ‘a beautiful and neglected instrument’.

DISC 6
Hickox’s invigorating account of the 8th Symphony was originally coupled with the 6th and the ambience of All Saints certainly enhances the percussion in the finale, a Toccata, with its tuned gongs and “all the ’phones and ’spiels known to the composer”.
The remainder of this disc is occupied by a fascinating collection of archive material that includes a 28 minute lecture broadcast from 1955 by the composer, a discussion between Sir Adrian Boult and Robert Layton about the 3rd and 4th Symphonies and contributions from Sir John Barbirolli and the composer’s widow Ursula Vaughan Williams.

Each of the six SACDs is packaged in a cardboard sleeve inside a box that also includes a 47-page booklet with authoritative notes on each symphony, predominantly by the late Michael Kennedy, as well as the texts for the Sea Symphony and dates of the recordings.

While there are now other recommendable individual accounts on SACD of these works, this Chandos cycle spanning 20 years is a unique and more than worthy contribution to the celebration of the Vaughan Williams 150th Anniversary.

It looks to me that Job is missing from this box set, Vaughan Williams: Symphony No. 9, Job - Davis. I really love Job and play it often. If it is truly missing, getting the separate SACD is very worthwhile.

Both this set and the Boult set exclude ALL non-symphony pieces, which is a shame.

All the extra fillers from the individual CD releases are missing from this set, too bad really. 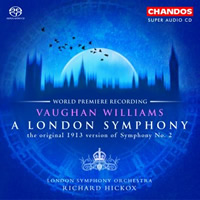 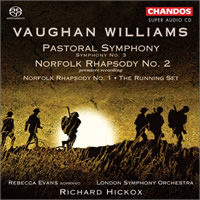 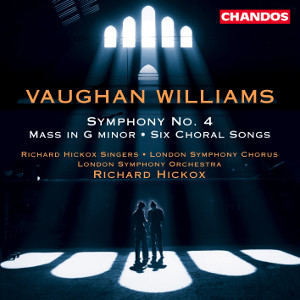 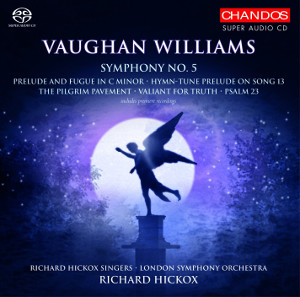 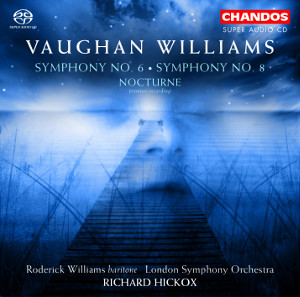 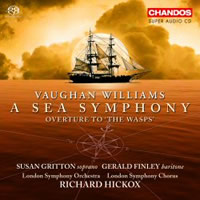 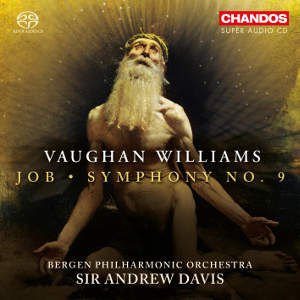 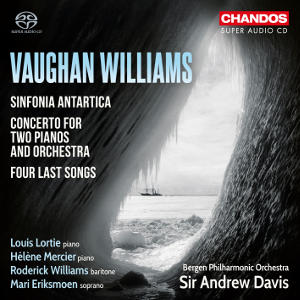