Oops - thanks for the correction! 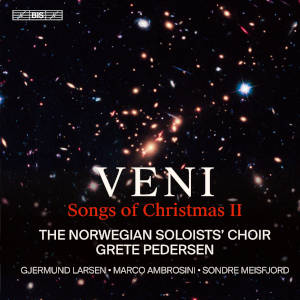 
December is a time of anticipation. We wait and we hope – veni, come! The songs on this album encompass many nuances and moods – from joy and jubilant celebration to deep melancholy and longing. They move between folk tunes, English carols and traditional Christmas songs from different times and parts of the world, between Bach and Ives, Bulgaria and Norway. Several of the songs refer to the passing of the year, the cycle of nature and rhythms of daily life: lullabies for peace of mind and comfort, and songs about surrendering ourselves to the unfathomable and unknowable in the midst of our everyday concerns: the stars will always shine in the sky – and dawn will come. In others, we meet the little child born in a stable – vulnerable and yet immensely powerful.

In the nine years following the release of ‘Rós – Songs of Christmas’ [BIS-2029], the Norwegian Soloists’ Choir’s annual Christmas concerts under the leadership of Grete Pedersen have become a cherished tradition in their native country. They are joined on this recording by folk musicians Sondre Meisfjord and Marco Ambrosini and by their long-standing collaborator, the fiddler and composer Gjermund Larsen, who also appeared on the choir’s previous Christmas album.

See, amid the winter’s snow,
Born for us on Earth below… 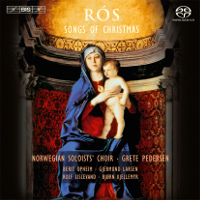