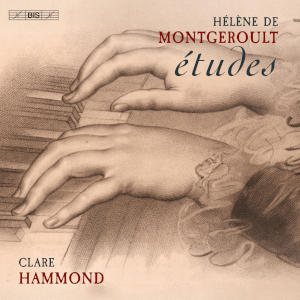 
Hélène de Montgeroult’s life reads like a novel: showing a precocious musical ability as a child in pre-revolutionary France, she became fêted as one of the finest pianists and improvisers of her time. Imprisoned during an attempt to reach Naples at the time of the Revolution, she was able to return to France. Here she worked for the Institut National de Musique, only to be imprisoned again during the Reign of Terror. Finally freed for good, she was made professor of piano at the Conservatoire de Musique in Paris, the first woman to occupy such a position. Meanwhile, she managed to compose an important body of work for the piano as well as a complete method, including 114 études.

In her liner notes to the disc, the British pianist Clare Hammond hails Montgeroult as ‘one of the most exploratory pianistic personalities of our time’. From her output, Hammond has selected 29 études that highlight the unique talent of this composer whose music is on a par with that by Chopin, Mendelssohn and Schumann, displaying a harmonic audacity, textural complexity and, despite its pedagogical purpose, a singing quality and an expressive depth. Forgotten so comprehensively for such a long time, Montgeroult’s Études deserve a similar renown and popularity as those by her contemporaries.