I found the information on the Tower Records Japan and HMV Japan sites. For disc 15 it says: ゴルトベルク変奏曲 ... 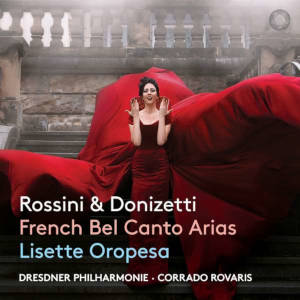 
On her second solo album Lisette Oropesa has combined two of her greatest loves, the French language and Italian bel canto. This recording with the Dresdner Philharmonie under the baton of Corrado Rovaris showcases the variety of lesser-known and more popular works by Rossini and Donizetti, featuring arias that contain coloratura, lyricism, drama, heightened emotion, and even comedy. Star soprano Lisette Oropesa made her Pentatone debut with Ombra Compagna, Mozart Concert Arias in 2021, and sung the title heroine in a complete recording of Verdi’s La Traviata, also released on the label in 2022. The Dresdner Philharmonie was involved in that same recording, and has also participated in several other recordings released by Pentatone, such as Weber’s Der Freischütz (2019), Mascagni’s Cavalleria Rusticana, Puccini’s Il Tabarro (both 2020) and Beethoven’s Fidelio (2021). Conductor Corrado Rovaris particularly excels in bel canto and verismo repertoire, and makes his Pentatone debut.
A San Francisco Classical Recording Company Production.