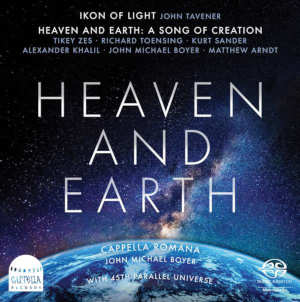 Richard Barrett, Cappella Romana’s Director of Publications, says in his extensive essay that Ikon of Light and Heaven and Earth are “complementary musical compositions that focus on these parallel aspects of light—supernatural and natural—in Orthodox spirituality.” The two works offer a transcendent experience of musical beauty–one informed by Orthodox spirituality and influenced by the contours of Byzantine chant. Ikon of Light explores the inner, mystical illumination of the soul as described by the medieval mystic St. Symeon the New Theologian. Heaven and Earth weaves Renaissance counterpoint, Slavic harmony, Georgian polyphony, and more around a central Byzantine melodic line. The composers create a tapestry of shimmering harmonies that finds unity through diversity, underscoring the Creation Psalm’s theme: “How magnified are your works, O Lord. With wisdom have You made them all!”