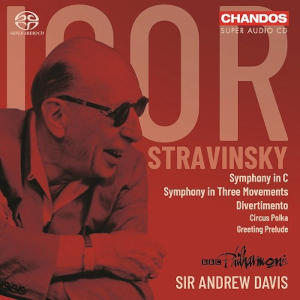 Sir Andrew Davis is without doubt one of the most versatile and distinguished British conductors with a career stretching more than half a century. His pre-eminence in British music has to some extent overshadowed the eclecticism of the repertoire he conducts both in the concert hall and the opera house. However, a cursory perusal of his many (200+) recordings reveals that the name of Igor Stravinsky is almost entirely absent.

This generously filled (83.27) SACD from Chandos convincingly remedies that situation with a programme that not only includes the composer’s two important neo-classical symphonies written in the 1930s and 40s and an entrancing ballet suite based on music by Tchaikovsky but also a couple of trifles that illustrate Stravinsky’s dry sense of humour.

The aphoristic ‘Greeting Prelude’ written for the 80th birthday of Pierre Monteux in 1955 wittily explores the melody of ‘Happy Birthday’ in serial terms and Davis dispatches it with flare in a typical 0.55 seconds.

Davis’s accounts of the two contrasting symphonies that Stravinsky composed during World War 2 − the ‘Symphony in C’ (1938-40) and the ‘Symphony in Three Movements’ (1942- 45) − are notable both for the precision of the playing and the clean articulation the conductor elicits from the BBC Philharmonic who are on superlative form throughout this disc. The ‘Symphony in C’ receives here its first modern recording in multi-channel SACD and for that reason alone is to be warmly welcomed. Davis’s tempi for each of the four movements seem eminently sensible, allowing every detail of the score to emerge with absolute clarity and while the recording gives a desirable prominence to the winds, it never does so at the expense of the strings.
All of the above also applies to the more overtly dramatic ‘Symphony in Three Movements’ where the conductor’s firm control coupled with the incisive attack from his musicians in the outer movements yields a bracingly energetic rendition of this marvellous score.

In between the Symphonies we have ‘Divertimento’ which is a four-movement concert suite that Stravinsky arranged from his 1928 ballet ‘Le Baiser de la fée’ (The Fairy’s Kiss) based on songs and piano pieces by Tchaikovsky. On SACD we already have an outstanding version of this entrancing music from Vladimir Jurowski and the Russian National Orchestra, but this new account is its equal. Davis takes a slightly more relaxed view of the ‘Danses suisses’ and the final ‘Pas de deux’ than Jurowski but otherwise the honours are equally divided.

To bring this this outstanding programme to a close we have Stravinsky’s ‘Circus Polka’(1942). This was originally scored for circus band and organ. It is performed here with wit and appropriately galumphing elan in its1944 symphonic version.

The recording, made in the BBC Studio at Media City, Salford, was in the capable hands of veteran engineer Stephen Rinker and producer Brian Pidgeon who have achieved a spacious, yet crisply focused sound of the utmost fidelity, making this is one of the most desirable Stravinsky releases I have heard for some considerable time.