I don't have Analogue Productions' release, so I can't say which high-resolution version has the best sonics. Perhaps someone on this site has both and has compared them. In ...

Aho: Concertos for Violin and for Cello - Roozeman, Vähälä, Elts 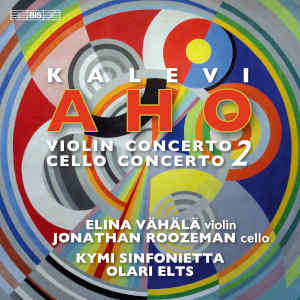 
Having broken off work on a second violin concerto in 2012, the prolific Finnish composer Kalevi Aho only returned to the project after being contacted by the violinist Elina Vähälä. While aware of the weight of tradition and eager to avoid the pitfalls of violinistic clichés, Aho nevertheless wrote a virtuoso work dominated by the soloist, who is offered many possibilities to realise her own interpretative conception. The orchestral part was specifically composed for the Kymi Sinfonietta with its sound in mind.

With his second cello concerto, Aho also wanted to write a piece that orchestras of the size of a sinfonietta could include in their programmes. Here too the solo writing is particularly well suited to the instrument. The youngest winner of the International Tchaikovsky Competition in 2015, cellist Jonathan Roozeman takes on this work in five movements played without interruption and in the last section delivers a cadenza as unusual as it is clever. The Kymi Sinfonietta is conducted here by Olari Elts, a champion of contemporary Baltic composers.