I had another listen to the SACD and compared it to the 2001 (bonus tracks) CD. It is the same on both, so it will be the tape MoFi were using, rather than a glitch they ... 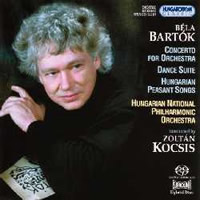 This is one of the finest SACDs I have heard.

It was recorded in the Italian Institute in Budapest, a favourite venue with contributors to this site, in September 2002. It may have been recorded in PCM, but nothing in the booklet indicates this, nor, for that matter, DSD.

The recording of the Concerto for Orchestra in MC is a model of clarity, definition and impact. The rear channels are used discreetly, to provide ambience, and never unduly draw attention to themselves. It is, however, the performances that are outstanding.
The Hungarian National Orchestra has real character and a distinctive timbre in each of its sections, unlike many of the more famous orchestras of Europe and the US. Listen, for example, to the plaintive oboe at 4.30 in the first movement and later the pungent and incisive brass stretto from 7.01 in the same movement.

The second movement (Giuoco delle coppie) opens with the most delicious chuckling bassoons you can imagine and the string sections play superbly throughout.

If you know this work well you will be delighted by the astonishing orchestral details that are captured in this recording. Two examples: the soft tam-tam strokes at 3.15 in the Elegia and the cymbals plus tam-tam at the climax of the Intermezzo interrotto. The latter, on most recordings, appear as a mush of sound not two clearly defined percussion instruments.

The finale is fast and exciting, but not rushed. Kocsis gives his players time to articulate the notes and it pays off handsomely.

I have a number of RBCDs of this work including Reiner, Solti, Dorati and Boulez but none is better than this one.
Everything I have written above also applies to the Dance Suite, which sounds truly Hungarian, and the useful filler of the Hungarian Peasant Songs.

Congratulations to the Hungarian Ministry of National Cultural Heritage for sponsoring this wonderful recording.

I hope that Kocsis will now go on to give us the Music for Strings, Percussion and Celesta and the Miraculous Mandarin.

I agree with the review, amazingly all ot Bartok's works are available on SACD now, the only SACDs from Hungaroton.

Kocsis just recently passed on, and Hungary mourns him like a national hero, RIP or Isten nyugosztalya as we say:

You should not miss this excellent recording, superb music making and of demonstration quality. One of the best sounding SACD produced, it'll certainly impress your friends. As fresh now as ever. Although the booklet notes are silent on recording details, I am fairly confident this was an early days DSD, quite possibly recorded under the supervision of the Sony engineers.

It is not "pure DSD" however, as inspecting the waveforms shows a clear, hard cutoff right at 44.1khz - so this was almost certainly mastered as PCM.

Still sounds fantastic though and has huge dynamic range, which goes to show that mastering and recording are what make a disc shine - not what digital format is used, or how much ultrasonic content (that none of us can hear) is digitally captured!

DSD or PCM? Some labels leave the guesswork to the listener. Most important, however, is what our ears tell us. Like Ben suggests, there are badly mastered original DSD and superbly engineered original PCM recordings.

It also prompted me to seek out more. No mention is made of where the recording took place. The site ‘adagio.com’ (https://app.idagio.com/fr/works/6744950) notes that Zoltán Kocsis and the Hungarian National Philharmonic played Bartok’s Concerto for Orchestra in September 2002 in the Phoenix Studio, Italian Institute, Budapest. The booklet, however, says P 2004, and the critic Miklós Fáy observes that “The Music Academy (the concert hall of the Ferenc Liszt Academy) has rarely heard a Concerto performance like this.” Not that it really matters, the result remains what it is.

Moreover, I used the opportunity to compare the sound quality with that of Pentatone (Bartók, Kodály: Concertos for Orchestra - Hrůša) recorded in DXD, signed Erdo Groot. Should be OK. But it is not. The recording sounded a bit muffled as though they had forgotten to raise the curtain (I know, it’s over the top and differences are only noticeable in direct comparison). Anyway, if you don’t hear the difference, no problem. Go for the best interpretation, which, of course, can be a very personal choice. But as far as I’m concerned (and confirmed by other commentators) Graham was dead right. Not that the Czechs are bad, but it misses the drama and bite Kocsis draws from his musicians.

Get it while you still can…

Can't believe that seventeen years have passed since I reviewed this wonderful SACD.

I purchased it in 2004 at The Franz Liszt Academy while on holiday in Budapest and as Adrian states this recording is one not to be missed.
It was recorded in 2002 as stated in the booklet - the P2004 on the disc label refers to the date of publication.

The venue, I understand, was the Italian Institute where so many recordings were made before the opening of the Palace of Arts, National Concert Hall in Budapest.

Phoenix Studio is the name of the company who made this recording (and the others in the Hungaroton 'Bartok New Series') not the name of a venue, hence the confusion in the booklet 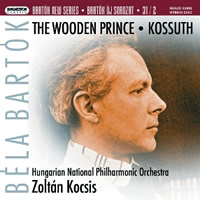 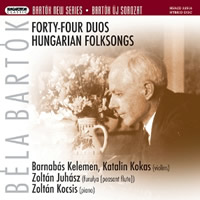 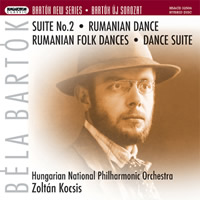 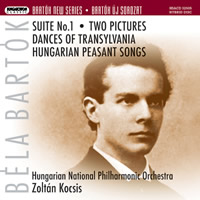 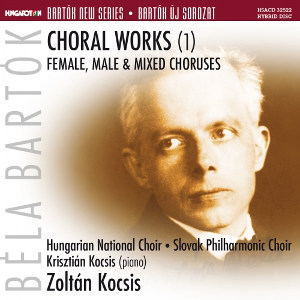