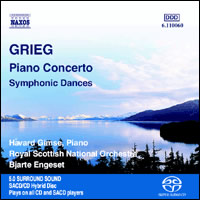 
In his own words, Grieg aspired "to paint Norwegian nature, Norwegian folk-life, Norwegian history and Norwegian folk-poetry in music". In Autumn sees Grieg take inspiration from the forces of nature, both life-giving and destructive, whether it be from the farmers' harvest celebrations or the ensuing death and decay, while the Symphonic Dances make extensive use of Norwegian folk-melodies. Indeed it has often been said that the famous Piano Concerto has an element of untamed wilderness in its opening timpani roll followed by the cascading chimes of the piano. Whatever its inspiration, this cornerstone of the piano repertoire remains one of the most enduringly-popular of all concertos on account of its profusion of inspired melodies, noble eloquence and poetic vitality.