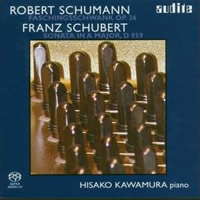 
Two months before his death in 1828, Franz Schubert wrote three final piano sonatas which form the high point of his piano oeuvre. Above all, the A major Sonata, D 959 is characteristic of Schubert’s highly individual handling of sonata form. Figured themes, episodic extensions, but also rhythmic wit, bold outbursts and perfect proportions make it a Schubertian delicacy. Despite the high musical value of his compositions, the Viennese master’s production was already forgotten a few years after his death.

It was Robert Schumann who persistently pushed for a revival of the “great” C major Symphony of Schubert, thus turning the attention of the musical world towards the Viennese composer. Schumann also occupied himself intensively with sonata form: his “Faschingsschwank aus Wien” (Carnival Jest from Vienna) is an original attempt at an alternative to the sonata cycle. Outwardly continuing the idea of a series of character pieces that he had realised in “Carnival,” Schumann is less concrete in this work; it is marked by abrupt contrasts, varying between effervescent lightness and inward-looking reflection, wandering harmonies, passionate, fantasy-like expression and high virtuosity. Schumann follows his own advice in this sonata-in-disguise: “So go ahead and write sonatas or fantasias (what does the name matter?), but don’t forget the music, and implore the rest from the good genius.”

This disc showcases an artist who holds promise for the future. In this disc though, the performance of the Schubert sonata badly lets down the encouraging Schumann rendition.

To get the negatives out of the way first, Kawamura's Schubert. This is very earth-bound playing compared to Schubert: Piano Sonatas - Thomas Günther, and this is not just a function of using a modern piano. Artist's like Brendel manage to avoid sounding lethargic and give compelling & imaginative performances on Steinway's so there is really no excuse for what has been issued here. Even the relatively well done Scherzo is let down by some very distracting pauses I've not heard or seen before. It is a shame that more Schumann wasn't chosen as this seems to suit Kawamura's style of playing much better to my ears.

The Schumann is, fortunately, an entirely different league of performance. Apart from the odd passage that sounds like pressured playing, the performance has all the feeling of spontaniety that the Schubert lacked. Not that the Romanze or Intermezzo are played fleetingly but rather, when the music demands an energetic response it is forthcoming here. Still, for all this, it would not trouble accounts from Perahia or Richter (were they on SACD). To Kawamura's credit, at no time does the piano sound "hammered" and she produces a tone of frequent beauty.

An interesting feature of this disc is the use of a Kawai piano. This instrument produces very beautiful sounds under Kawamura and has a pleasing clarity. This is also reflected in the recorded sound, where the piano is captured very well by Audite. Thanks must also go to the technician Atsusji Komiyama for keeping this instrument in such fine condition throughout the sessions.

Not really recommendable unless you really can't wait for an alternative of the Schumann to come along. 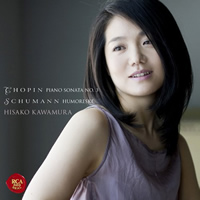 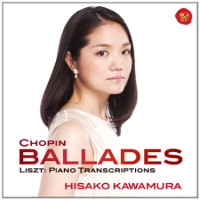