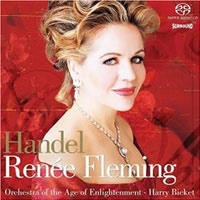 At a first glance this disc would appear to be primarily a showcase for the photogenic Ms Fleming rather than a serious survey of Handel opera and oratorio arias. The SACD case and insert booklet feature no less than seven pictures of the glamorous diva and there is even one on the label of the disc itself as well as a plug for her book ‘The Inner Voice’.

However to judge this disc by the presentation alone would be a mistake.

The sixteen arias recorded here are chosen with intelligence and encompass a wide range of moods and tempi. They also include a couple of rarities such as ‘Sommo rettor del cielo…D’una torbida sorgente' from Lotario and show off Ms Fleming’s luscious voice to great advantage as well as allowing us to hear it in unfamiliar repertoire. She negotiates these difficult arias with ease and I found her occasionally maligned diction to be very good indeed throughout this recital.

Ms Fleming praises the Orchestra of the Age of Enlightenment for its evocative playing and says ‘In the heat of recording, I may have actually been heard to swear off singing with a modern orchestra again!’ The orchestra does provide stylish accompaniments, with some excellent solo work, but, considering Mr Bicket’s ‘period’ credentials, one or two tempi can seem rather ponderous, particularly that for ‘Ombra mai fu’ which here conjours up funeral services rather then shade provided by a tree.

The spacious acoustic of the recording venue, Watford Colosseum, provides a well-upholstered sound, although at times the bass line was almost too rich.

In 2-channel stereo, SACD and CD, the balance between voice and orchestra is fine, but,surprisingly, in the spacious surround sound mix Ms Fleming’s voice appeared too far forward in relation to the orchestra. She sounded as if she were singing from a few feet in front of the listener while the orchestra is some way back in the middle distance. This is quite noticeable in ‘Let the bright Seraphim’ where the splendid trumpet playing of David Blackadder is given a balance more suited to the off-stage trumpet in Beethoven’s Leonore No 3 Overture (the text reads…their loud uplifted angel-trumpets blow!).

As I have indicated there is much ravishing singing on this generously filled (70min.) disc, and Renée Fleming’s many admirers, of whom I am one, will want this recording. I do not, however, find as much characterisation and involvement with these pieces that a singer such as Lorraine Hunt Lieberson brings to this music. 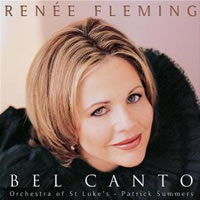