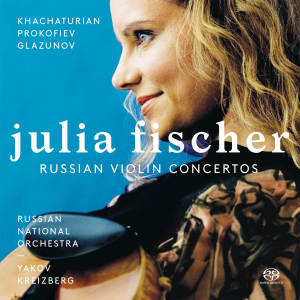 
This remarkable album marks the recording debut of German violinist Julia Fischer as well as the beginning of her extraordinary partnership with Russian-born conductor Yakov Kreizberg, which would result in numerous PENTATONE releases before the conductor’s untimely death in 2011. Together they tackle three Russian violin concertos which have been tragically overlooked, shedding new light on these masterpieces.

Fischer recalls first becoming enthralled with Khachaturian’s violin concerto at the age of 11, stating “I noticed straight away how impressive this work could be, and since then I have striven to establish it as a part of the standard violin repertoire.” The addition of Yakov Kreizberg and the the Russian National Orchestra, one of the premier ensembles to rise from the ashes of the Soviet Union, provided the perfect opportunity to showcase Russian repertoire.

The best-known work on the album is Serge Prokofiev’s Violin Concerto No. 1, a tour de force which features Prokofiev’s satirical tendencies and lyrical talents in equal parts. Rounding out the selection is Alexander Glazunov’s Violin Concerto in A minor, a triumph of Russian Romanticism which Fischer clearly relishes in this performance, declaring that the work was “absolutely delightful and rewarding for the instrument.”

The maturity of the repertoire selection, superb audio quality and delightful interplay between soloist, conductor and orchestra all contribute to a truly stunning debut album. The violin concertos of Khachaturian, Prokofiev and Glazunov are preserved in timeless beauty, providing a testament to the masterful artistry of Yakov Kreizberg, the Russian National Orchestra and a very precocious Julia Fischer.

This has to be one of my favourite violin concerto discs - stuffed full of beautiful but highly contrasted music, presented with great panache and sensitivity from a young violinist, orchestra & conductor in wonderfully well balanced MCH sound.

Right from the opening, Kriezburg and the RNO (a fabulous ensemble since inception) provide a vivid and colourful introduction to allow Julia Fischer to come and dance away with the main theme. Throughout the accompaniment is alert to the need to allow the solo lines to come through the orchestral textures. The tempo taken is not driven but always has a sense of forward movement. In the slow movement, the more meditative side of Khachaturian's music is given free and imaginative rein by JF. The concluding Allegro vivace is just that! The playing bursts in and gleefully skips along which makes for a quite invigorating experience - I had to restrain my hand from pressing "repeat" on the remote control such is the pleasure that I experienced (I gave in after listening to the whole disc though!)

The Prokofiev is a harder piece to pull off successfully, the heart is not worn on the sleeve like Khachaturian or Glazunov do but when it is successful it is one of Prokofiev's most enchanting pieces which hides some darker emotions. In the opening the solo line floats above the shimmering tutti strings and soars with the woodwind. Some violinists cannot vary their tone sufficiently and so appear to be strident, "weak" or bland. Fischer does not suffer from this and treats us to a lovely display ranging from tender to dazzling to strong. Just as the music creeps in from barely being concious, it retreats in a most delightful manner here with all contributions perfectly balanced against one another. The Scherzo then is played with such energy that it almost eclipses the vigour of the Khachaturian. The almost balletic and songful closing movement that moves ever closer to tranquillity is given the same care and attention that was lavished on the closing of the first movement and delightfully disappears into the ether that it emerged from some 20 minutes earlier.

The Glazunov is a very "sweet" experience and as such the performers need to treat it with lightness that we don't reach for more substantial fare. The opening section of this piece is thrown off without a care in the world and we soon find ourselves in the more meditative Andante. Here Fischer phrases without a hint of self-conciousness that others seem to wallow in and it is a very refreshing experience indeed not to have ones ears laden with sentimentality. The cadenza builds up a real head of steam which powers the concluding Allegro to the dazzling conclusion the Glazunov had surely imagined as pen was put to paper. Throughout, Kreizburg and the RNO appear to be of identical mind as Fischer and the RNO leaves me in no doubt of their stunning but selfless virtuosity.

The recording itself is extremely good with a great deal of detail coming across with real presence in this very vivid music. The balance places us in my favourite position in the stalls (about half way back) and the accoustic is presented nicely, with percussive effects echoing nicely off the "walls" in MCH.

A real joy - don't hesitate, I find it really hard to imagine this disc being bettered for a long time to come.

After reading the glowing reviews presented here, I decided to get this one and this disc does not disappoint! Julia Fischer and Yakov Kreizberg make an excellent team. Julia Fischer has a lyrical, singing tone and is completely at home in these wonderful performances with the Russian National Orchestra.

The disc starts off with an exhilarating performance of the Khachaturian concerto and it is mind-boggling that this piece has not been recorded and performed more often. It truly is a moving and exciting piece of music. Fischer has no trouble with it and plays it with supreme artistry. The Prokofiev is a moving and lyrical piece with plenty of passionate playing, the soloist at times, embedded in the orchestral sound. The Glazunov is a lovely piece to end this fine disc.

There is wonderful ambience and depth in this recording and the playing is simply first rate. You won't hear a single moment of "routine" in this collection.

The excellent booklet features notes by Ms. Fischer herself and she has always been confused at concert promoters and conductors who have been reluctant to include the Khachaturian concerto in their concerts. I find this completely incomprehensible, given the excellent treatment Fischer and Kreizberg give in this recording. The booklet also features notes on Ms. Fischer's career, conductor Yakov Kreizberg and the Russian National Orchestra. You will also find some photos of Ms. Fischer, as well as her conductor and orchestra.

To summarise, top-rate sound, superior performances and an excellent booklet make this one of the very finest SACDs in my collection. Completely recommended... miss at your peril!

Glad you enjoyed it! 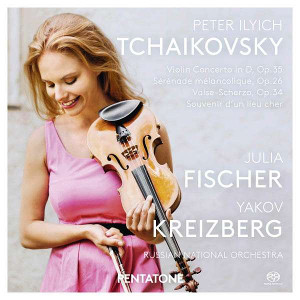