What about this, Mr. Paganini? - Gawriloff, Ratner 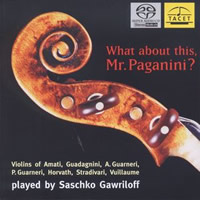 
On 28th December 1995 seven violins, selected instruments created by the world′s most famous violin makers, met for a high-class competition. "Who is the fairest in the land?" That was and is the question...

This disc from Tacet gives the listener a unique opportunity - that of hearing a master musician playing seven different instruments from 1640 - 1992 in the same piece. It is a fascinating exercise and proceeds thus: Amati (1640), Guadagnini (1771), A Guarneri (1671), P Guarneri (?), Horvath (1992), Stradivari (1683), Vuillaume (1870) - it can be seen that the important Cremonese makers are covered together with a fine French manufacturer and a modern Hungarian model.

So, does it make a big difference? Well, yes & no - clearly the player makes the greatest difference between a good and bad sound but as the music & musician are constants here the differences are startling. One of the greatest contrasts is between the two Guarneri's (A is P's grandfather) with the more modern instrument sounding considerably richer. It is no surprise that the most rounded sound comes from Gawriloff's "usual" instrument (and this spoils the experiment a little) - the Strad! Also, the thinnest sound comes from the Horvath but this isn't far behind the older Guarneri & I'm sure given a bit more time to mellow will be a fantastic instrument to play & hear!

If you are concerned that hearing the same piece 6 times (Bach's Sarabande from the D-minor partita) is boring, well it isn't here. Gawriloff then treats us to a nice mini-recital on, presumably, his favourite 5 with each piece being chosen to suit the instrument (or was it vice versa?) Either way, the performances are good without being exceptional, although this is largely a reflection that the music chosen isn't absolutely first rank.

The younger Guarneri is given a sonata by Veracini, the elder is given Kreisler's Variations on a theme of Tartini. We are then treated to a beautiful rendition of Dvorak's Romantic Pieces on the Stradivari, followed by Paganini's Cantabile on the Amati. Finally & the choice here is wonderful, the Horvath in Webern's Four Pieces Op.7 where the slightly wirey timbre suits the sparse textures. In the mini-recital, Gawriloff is ably partnered by Kira Ratner who is competent but not inspiring.

The sound is, unusally for Tacet, completely straight and well balanced with a nice distance between us and the musicians so that there is some accoustic presence but not overly so. My slight gripe is that the playing time is under 53 minutes, so there would have been ample opportunity to demonstrate the Guadagnini & Vuillame in more substantial repertoire.