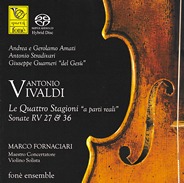 There are already 13 different versions of the Four Seasons on SACD with a violin soloist so a new version has to have some special attributes to stake a lasting claim of a space on anyone's shelf. The two distinguishing aspects of this recording are that
(a) the total number of players is only 7
and
(b) the instruments all hail from Cremona and most come some very special makers.

The instrumentalists, despite their small number, certainly manage to produce a full tone that has largely disappeared from Baroque music today; it is unusual to say the least and many might find it uncomfortably large, myself included, now that HIP is the norm in this repertoire. Whether this is entirely the instrumentalists fault is hard to determine because the recording is very close which doesn't give them much opportunity to pare down their sound - this is just as true in the sonatas as well as the concertos so I must conclude that it is more the engineers than artists doing.

The performances themselves, partly because of the sound, are not particularly special to my ears; they do have a certain laid back and sunny feel but I feel that they are a little too relaxed in mood. The rather casual approach unfortunately extends into Marco Fornaciari's intonation, especially at the most taxing moments of this well known collection of Vivaldi's. Really, in this day and age, there is no excuse for this as many student ensembles around the world could perform better.

I find this a very odd review of this disc and it is one with which I can say that I do not entirely agree. There is some very fine playing from all concerned and the recording is extremely good being warm and rich but very clear with good separation and depth. I did not find it too close. The performance may not be of the high energy style favoured elsewhere but is contemplative and relaxed. I would have expected a 4 or even 5 star rating. I confess I have not heard the SACD version as it is changing hands for incredibly high prices (£86-£1185!). I have listened to the hires 24/96 streamed version. There is a DSD 64 download available at £9.99. It was only ever a stereo recording. Given the high prices I don't think I am alone in my experience with this recording.