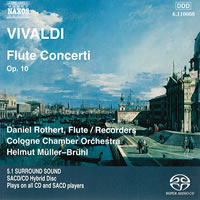 
Best-known for The Four Seasons, Vivaldi has been credited with the development of the Italian solo concerto as a popular form in the early 18th century. The Flute Concertos are especially innovative both as documents of performance technique and examples of the composer’s most imaginative writing. Three of the Concertos have descriptive titles which, although not strictly programmatic, clearly evoke the mood and characteristics of a sea-storm (La tempesta di mare), night (La notte) and the goldfinch (Il cardellino).