The recordings sound so good, that you can't believe that these recordings are almost 60 years old! I only listened to the 1st symphony yet, but I'm already so enthusiastic ... 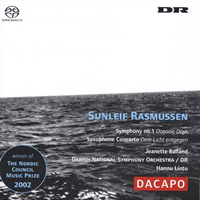 
It is no coincidence that the Faroese composer Sunleif Rasmussen quotes the poet and novelist William Heinesen in the title of his First Symphony, Oceanic Days. The ocean seems to flow through Sunleif Rasmussen's symphony, which was awarded the Nordic Council's Music Prize in 2002. The music grows in wave-like motions and gathers into towers of sound analogous to the surf breaking on the Faroese shore, the composer's inexhaustible source of inspiration.

Sunleif Rasmussen is the first – and so far the only – conservatory-trained Faroese composer. In recent years has been experiencing an international breakthrough that helps to place his native islands on the world map of music.

Rasmussen's works conceal traditional Faroese melodic material that permeates the structure of the music, but is not heard directly. In the saxophone concerto Dem Licht entgegen from 2001, the composer focuses on an indefinable movement towards the light. The concerto has a constantly ascending musical tendency, also reflected by the way the soloist must change in the course of the work from the low baritone saxophone through the tenor and alto to the bright soprano saxophone.

Dacapo Records now presents a razor-sharp premiere recording of Sunleif Rasmussen's two major works in the new super audio CD format*, which reflects every nuance in the Faroese composer's orchestral universe. The Danish National Symphony Orchestra/DR is conducted by Hannu Lintu, and the saxophonist Jeanette Balland, who gave Dem Licht entgegen its first performance in 2001, is the soloist.

Sunleif Rasmussen (b. 1961) hails from the Faroes, a Danish outpost in the North Atlantic. This small archipelago consists of vertiginous cliffs and crags of volcanic rock, grassy pastures and small fishing villages. Its harsh environment and tightly-knit community have inhabited Rasmussen's music since he moved into the classical world from his prior jazz and heavy rock base.

Symphony 1(1995-97) is one of his earliest works and directly concerns his heritage. It bears the title 'Oceanic Days', wryly adopted from a line by fellow Faroese poet/writer William Heinesen (1900-1991), "It's again one of those Oceanic days". Rasmussen's style is primarily atonal, and he doesn't use melodies directly in his scores but extracts their harmonic series, which permeate the compositions and underlies their structure. In the Symphony, he adopts two Faroese melodies, a secular ballad 'Herr Sinklar' and a hymn tune 'Jeg ligger her i stor elende' (“I lie here in great wretchedness”), reflecting on their meaning in the context of a colourful orchestral evocation of the Atlantic's surging green waves, play of light on the sea, sounds of wind, surf, grass and calls of oceanic birds. Despite the theoretical and intellectual processes involved in his composing, Rasmussen is one of the contemporary composers who does pay attention to his listeners, a real communicator.

The Symphony is a significant work, at just over 40 minutes, and is in three movements, played without pauses. The large orchestra with battery of tuned and untuned percussion produces sequences of layered colouristic melodic and rhythmic patterns. The first movement, 'Tranquillo', musically portrays the calm swelling ocean, emerging Kraken-like from the abyss; shimmers of light play on the surface, menacing surf breaks, seabirds wheel and dive. Scherzo-like sections suggest comic avian characters, perhaps Puffins. A scary episode is accompanied by mewling seabird cries like lost souls, produced by woodwind and string glissandi. In a sense this is hard-core Debussy, an abstracted play of waves, wind and light.

'Largo' has a tragic, lonely, keening cello solo, timeless yet deeply personal. A forlorn clanging bell reminds one of the village churches (and their grave-yards). After a soothing, glowing sunset a terrifying climax sends aloft flocks of birds in alarm, ending in a fusillade of drums.

'Cantabile' is eerie, more magical bells, strings intoning elements of the hymn tune and the string players are directed to sing along with their parts, movingly conjuring the essence of the human habitation of the awesome landscapes depicted in the music. The tuba capriciously appears (representing the Blue Whale) and its solo gambols good-humouredly with the waves until a violent climax brings chaos until terminated by two heavy blows and a final crashing descent. Perhaps this represents memories of the Faroese grindadráp, an annual cull of pilot whales.

Pictorial interpretations aside, Symphony No 1 is an arresting work which shows remarkable instrumental flair and resourceful orchestration. Rasmussen is clearly already a masterful handler of large orchestral forces.

The Saxophone Concerto is a more recent work (2001) and more abstract in expression. Its subtitle, 'dem licht entgegen' (towards the light) expresses its thematic purpose. As with the Symphony, it too is based on the harmonic spectrum of a Faroese hymn - "Som den gyldne sol frembryder" (As the golden sun breaks out). Uniquely, the soloist uses different saxophones for each of its four movements, beginning with the baritone, then tenor, alto and soprano saxes. Following the theme, the solo part begins each movement in its lowest register, then works through to the highest range as the movement progresses - musically moving "towards the light". The movements are played without a break, giving the concerto a symphonic character. In the lyrical second movement, Rasmussen again uses the intriguing device of having the string players sing along with their parts to haunting effect, and in the third movement a section of the orchestra is placed further back in spatial dialogue with the others.

Danish soloist Jeanette Balland copes marvellously with the challenges of this complex work, demonstrating the facets of each variety of saxophone with great virtuosity, and she is more than a match for the often very 'macho' nature of the writing, especially in the aggressive first movement. Her monologue in the second movement (Cantabile) over the singing strings is memorably fluent, as is her whisper-quiet work at the start of the third movement. She and conductor Hannu Lintu demonstrate that this is one of the most important concertos for saxophone in recent times, and it deserves to gain a foot-hold in the repertoire.

Sonically, Da Capo have produced an audiophile's dream. The huge orchestral array is spread widely in the resonant acoustic of the Danish Radio Concert Hall, Copenhagen. Both producer and engineer have presented the often spectacularly scored music in its most atmospheric way. The orchestra is represented by pin-point instrumental placing in a natural perspective. In the Symphony, the auditorium becomes excited by Rasmussen's carefully organised tonal and harmonic magic, giving a multichannel listener a wonderful sense of involvement which echoes the music's vast compass. Moreover, creative and non-gimmicky use has been made of the surrounds, with tuned and untuned percussion units in dialogue across the 3-d sound stage. An absorbing and stimulating listening experience, with engineering fully at the service of music making.

The Danish National Symphony Orchestra and Hannu Lintu give a visionary account of Rasmussen's communicative and often innovative music, with an impressive première of the Saxophone Concerto from Jeanette Balland. A superb release both sonically and musically.