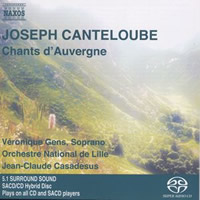 
Since his death in 1957, Canteloube has become widely known for his folk-song arrangements, particularly his Chants d'Auvergne which have won increasing popularity. Written between 1924 and 1955, they comprise a series of original folk-songs, some accompanied by instrumental ensemble, others by full orchestra, evoking the sounds of the countryside. The charming and sensual songs on this disc are all accompanied by full orchestra, and given a ravishing performance by Veronique Gens, herself native to the Auvergne region.