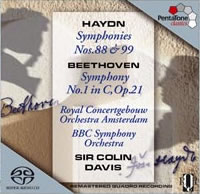 The Colin Davis RBCD version of Haydn’s London Symphonies, recorded between 1975 and 1981, has been a favourite recommendation for many years. It is good to have at least one of them in the excellent PentaTone RQR series coupled with Symphony No. 88.

These are unashamedly ‘big band’ performances, but played with such affection and style that they make an excellent adjunct to the many ‘period' versions now available. Anyone who enjoys the equally refreshing performances of these works by say George Szell or Eugen Jochum will instantly warm to these.

The Concertgebouw orchestra is tonally very rich, but plays with such lightness and wit that the result never sounds heavy.

As usual PentaTone’s RQR re-mastering is exemplary and the ambience of the hall is well captured by the MC version.

Having greatly enjoyed the Davis Beethoven 5th (PentaTone PTC 5186 102), I am sorry to say that I find his performance of Symphony No. 1 rather disappointing. At 29m 14s it is one of the slowest (and dullest) I have ever heard. Though neatly played by the BBC SO, it lacks tension and forward momentum. The recording, made in Brent Town Hall, Wembley, is excellent and in many respects even cleaner than that of the Haydn
.
This SACD is definitely worth having for the Haydn 88 and 99 alone, but I doubt that I shall return very often to the Beethoven.

The stars I have awarded for Performance relate only to the Haydn.