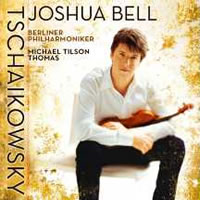 After an apparently cautious start, as if they were "warming up", this concert performance of the concerto quickly comes alive and most persuasively so. The first movement at 19'32 is a full minute slower than Mutter's most recent release, a minute and a half slower than Grumiaux's Pentatone RQR release and about half a minute slower than Bell's first recording for Decca. It is undeniably slower than other readings and there are occasions where one might think there is a sense of sluggishness or wallowing. I think that the primary reason for the difference in timings is Bell's tendency to become very reflective in the quieter moments of the score; some may not warm as much to this as I did but there is no denying that the more excitable passages have plenty of fire.

In the slow movement, the BPO's woodwind give a glorious display of tone colour before handing over neatly to Bell. A relatively "straight bat" approach is taken and for me it works well, not overplaying what could easily turn into cloying sentimentality. Bell, in the (not great) liner notes, says that the Tchaikovsky concerto is "intimate, elegant" which is certainly a way one could characterise his playing.

At almost 11 minutes, the finale might be (looking only at timings) thought to be more than a little slow. However, Bell chooses to open up the traditional cuts so the timings give a misleading impression. Whilst the tempo is not the fastest I've ever heard, it is far from the slowest and is certainly exciting. I'm sure that Bell is right to call the cuts "terrible" - the concerto sounds far more complete and I miss the material in other readings (such as Mutter's). There is no mannerism on display and a sense of joy exudes this movement. Those who are not keen on applause need to beware that, as is often the case in a work that ends so exuberantly, there is barely a moment before the first "Bravo!" is exclaimed (behind, left if in MCH).

As "fillers", Tchaikovsky's first thoughts on the slow movement (Meditation) and an excerpt from Swan Lake are given exemplary studio readings from all concerned. As in the concerto, Bell is suitable self-effacing and balletic by turn. Throughout Tilson Thomas & the BPO (especially the woodwind) provide superb accompaniments.

The Sony recording is more forward than the approach that DGG employ but at the same time there is much more emanating from my rears than I would normally expect from other concert halls - something that does reasonably accurately portray the Philharmonie (depending on choice of seat). The bass is typically congested for this hall - a shame as the basses & heavy brass in the concerto are clearly playing very well.

Whilst this can recommended on its own terms it's not a patch on Tchaikovsky: Violin Concerto - Fischer, Kreizberg on either sonic or artistic grounds. 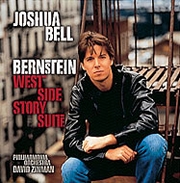