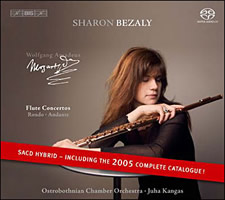 
(From the subsequent expanded release.)

When the greater part of the programme on this disc was released as the BIS 2005 Catalogue Disc, the response was electrifying. Sharon Bezaly was described as ‘God’s gift to the flute’ in The Times (UK), and a quote from the review in BBC Music Magazine is representative: ‘Bezaly's exquisite, technically immaculate, compelling playing sets new standards in this repertoire, as do Kalevi Aho's stunning cadenzas, composed especially for this recording.’ Other reviewers agreed, and the disc received top marks in Le Monde de la Musique, Crescendo, Musica and other magazines as well as on radio stations and web sites such as Classics Today.

This staggeringly successful title – 145 000 copies sold worldwide! – is now made available again with the important inclusion of a newly made recording of the Concerto for Flute and Harp. At a session in October 2007, we reunited the performers and recording crew of the 2005 disc in the original venue, with the addition of the eminent harpist Julie Palloc as co-soloist. Furthermore, Finnish composer Kalevi Aho again provided the cadenzas for the work, as he had for the other concertos on the disc. The result is not to be missed – a 24 carat, complete collection of all Mozart’s works for flute and orchestra, on a hybrid SACD with the extremely generous playing time of 81 minutes and 52 seconds!

The young Israeli flautist Sharon Bezaly has received glowing critical acclaim for her performances and recordings of much of the flute repertoire. She is currently recording an A – Z of flute works for BIS and is already up to Volume 3!

Bezaly has recorded concertos by a number of contemporary composers including those by Kalevi Aho whose contribution to the disc under consideration is noteworthy, as he has written cadenzas for all the pieces recorded here.

This SACD contains all the works of Mozart for flute and orchestra, but only the first concerto in G major KV313 and the Andante in C major KV 315 were written by Mozart specifically for that combination. The second concerto KV314 is a transcription, by Mozart, of his sole oboe concerto, while the Rondo in D, KV184Anh that completes this disc, is usually heard in its original version for violin and orchestra as KV373. The adaptation recorded here was not made by Mozart but by an unknown hand.

One of my personal favourite recordings of these concertos is that made by Aurele Nicolet and the Concertgebouw Orchestra under David Zinman for Philips. I have always admired the wonderful line and seamless phrasing he achieves, and it is interesting to note that Bezaly learned from him “ circular breathing”, a technique of inhaling whilst continuing to produce sound, that was perfected by Nicolet.

Bezaly shows her outstanding virtuosity in all of the pieces recorded here; wonderfully smooth phrasing in the slow movements and an agile silvery tone in the allegros.

The accompaniments by the Ostrobothnian Chamber Orchestra are crisp and alert; played on modern instruments, but with a period style, and the balance between the soloist and orchestra is perfect.

The Aho cadenzas could be a problem for some listeners. Personally, I found them to be totally within the spirit of Mozart, yet with an inventiveness that made the usual cadenzas seem dull by comparison. They are nice and short but manage to exploit the range of the instrument to the full.

The BIS recording is up to their usual high standard and the surround channels enhance the clear acoustic of the Kaustinen Church, Finland.

This disc is offered at budget price and gets my highest recommendation.

A wonderful disc. Miss Bezaly is a fantastic flautist with musicality to match. As other site reviewers have noted, not all these pieces were written for flute (and one wasn't even arranged by Mozart) but one would never realise given the response of Bezaly and her accompanist.

The allegro's are played in a very spirited manner (without a trace of anything but selfless virtuosity) and the andante's sing beautifully from Bezaly's flute. The Ostrobothnian Chamber Orchestra under Juha Kungas are vivid in their response. The one area of potential controversy will be the cadenza's employed by Bezaly: Kalevi Aho wrote these "interludes" which feed on Mozart's material but some aspects are decidedly not Mozartian - the range & harmonic language mainly. I enjoy these tremendously refreshing ideas but fully appreciate that not everyone will - they take a certain amount of adjustment compared to the more conventional cadenzas usually favoured.

The recording is well up to the house standard and is tremendously well balanced.

As detailed, this is a PCM recording, but in inspecting the SACD waveform it is clearly mastered from Redbook CD 44.1khz PCM sources - so the stereo layer of this SACD is no better than Red Book.

The multichannel mix is great, however.

Album information on eClassical includes original sample rates, at least for BIS releases, so it isn't necessary to analyze waveforms to find that information. In this case it was 44.1kHz: https://www.eclassical.com/performers/bezaly-sharon/mozart-complete-works-for-flute-and-orchestra.html

Ah, good find. 44.1khz/24 vs 44.1khz/16 is entirely plausible (44.1khz/24 is somewhat uncommon and of highly debatable value as a DSD source, but it's plausible). If a DSD file is mastered from PCM it's usually quite easy to detect the original sampling rate of the PCM file, but there's no way that I know of to determine bit depth of the original PCM recording once it's converted to 1-bit DSD.

I'll take BIS's word for it, and assume this is sourced from (very slightly) better-than-Redbook 44.1/24-bit PCM converted to 1-bit DSD.

I thought it was well known that BIS recorded in 24 bit/44.1hz sample rate for years and years prior to about 10 years or so ago when they were able to record in 96hz. sample rate. There was a lot of discussion about it on the old forum.

"The dynamic range is better for 24 bit and should be measurable. 16 bit equates to 96 dB dynamic range, 24 bit to 144 dB DR. Those differences are quite audible as well."

The dynamic range is theoretically better for 24 bit, I think - you're correct. But that doesn't necessarily mean most or indeed any recordings of music use all of that - most do not, even at their loudest and most dynamic.

I'm also not sure the differences are "quite audible" - the ear has a theoretical max of around 120db IIRC, and practically speaking due to the limitations of physics tends to top out at around 70-80db even in ideal conditions.

Regardless, it's a good mastering, and I stand corrected - PCM source is 44.1/24

What the wider DR gives you Ben is the opportunity of an uncompressed recording - as is the mantra of BIS - so the scale of playback is realistic. This can be heard easily. Too many recordings are compressed during editing to enable more comfortable listening at home which clearly pleases a lot of people.

Most audiophiles to my knowledge prefer true scale even if they strain to hear a triangle and cover their ears in crescendo. A good system is needed also to unmask the quietest sounds from background noise.

That is the nature of our hobby is it not? 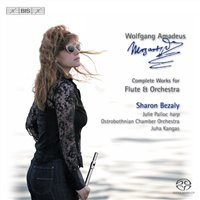