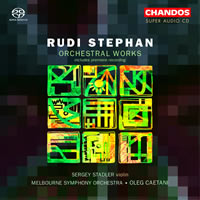 Rudi Stephan died at the tragically early age of 28 in the carnage of WW1. This excellent Chandos SACD presents three of his, all too few, orchestral works.

The fastidious composer eschewed poetic titles such as ‘tone poem’ and the works are all called ‘Music for….’

The style is unashamedly late romantic and reminds me most of Schreker, Zemlinsky and early Berg, but also shows the influences of impressionism. Having said that, Stephan’s is a clearly original voice and the works here written between 1910 and 1912 illustrate what might have been.

Very little of Stephan’s music has previously been recorded, although two of the pieces presented here are (were?) available on a Koch RBCD issued in 1999. All three are quite discursive, some may say rambling, but the many passages of great beauty, the constant changes of mood and texture and the imaginative orchestration ensure that they never become boring.

This spacious yet vivid recording illustrates the outstanding quality and playing of the Melbourne SO. Rich strings and weighty brass are shown off to excellent effect. Timpani and percussion are particularly clear and the organ contribution to the climax of ‘Music for Orchestra (1910)’ is most impressive.

The balance between soloist and orchestra in the rhapsodic ‘Music for Violin and Orchestra (1911)’, which for me brings to mind Szymanowski’s 1st Violin Concerto, is well nigh perfect.

The recording has a wide soundstage, with a particularly good front-to-back perspective and captures the seemingly excellent acoustic of the Robert Blackwood Hall, Monash University. The surround channels immeasurably increase the sense of space and realism.

Oleg Caetani, new Chief Conductor and Artistic Director of the orchestra is an eloquent and enthusiastic champion of these neglected scores. I can’t imagine them being better performed than here.
As with some other Chandos SACDs I found that the playback level needed to be increased slightly in order to appreciate to the full the recording quality.