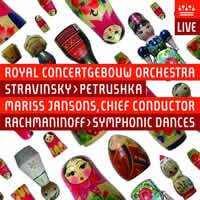 
Stravinsky’s Petrushka was performed to great public acclaim and recorded in the Concertgebouw in Amsterdam on 29 and 31 October 2004, whilst Rachmaninoff’s Symphonic Dances were recorded later that same year on 22, 23 and 25 December.

From the clear and transparent orchestral sound in Stravinsky’s Petrushka to the full glory of the symphony orchestra in the Rachmaninoff, Mariss Jansons and the Royal Concertgebouw Orchestra demonstrate once again the immense artistic heights attained by this unique collaboration between conductor and orchestra.

Compared to Paavo Jarvi's pedestrian version of Petrouchka (Stravinsky: L'oiseau de feu, Petrouchka - Järvi), this is everything one could wish for - life, vitality, characterisation and a vivid recording to boot! This may be due to the disc being a concert memento (well 3 performances for each piece actually) but either way, the Royal Concertgebouw Orchestra under Mariss Jansons completely outplay and conduct their Telarc rivals. Right from the opening, Jansons & his orchestra realise that to make exciting music, one needs not (just) speed but accents and an understanding of the musical counterpoint that is audibly conveyed. Added to this the engineers capture the sound very well giving a flattering (but not falsely so) sonic picture of the RCO. A nice feature of the Petrouchka is that each part of each Tableau is given its own track (15 in total). This is playing that has one on the edge of the seat, eager for more. Throughout the soloists from the orchestra are faultless and the audience is so impressed, it is hard to tell that there is an audience present!

This one of three SA-CD's of the Symphonic Dances that I have the pleasure of owning - reviews of the others (Rachmaninov: The Isle of the Dead, Symphonic Dances - Jurowski and Rachmaninov: Symphonies 1-3 - de Waart) will follow in due course. This one is possibly the most opulently played & recorded (the RFH lends a dry sound to the LPO disc) but combined with a similar level of electricity to that which Jurowski finds. There is wonderfully characteristic playing from the RCO (don't forget the superb cycle they made for Ashkenazy on Decca back in the early 1980's) and a sense of real refinement. Details are plentiful but they are allowed to come through naturally (no spotlighting here). Tempi for all three movements are well judged but against Jurowski, some will find them a little safe (particularly in the finale) and they may be thought on a par with de Waart's. As in the Stravinsky, the RCO is allowed a wonderful sense of fantasy and they exhibit keen musical intelligence. One point to note is that the final stroke on the tam-tam (gong) is not allowed to die as much as either rival disc before the applause breaks.

It is easy to overlook recordings that have been around for many years as new offerings pop up and we concentrate on the here and now. In the process of re-cataloging our collection we came across this gem from the RCO issued around 10/12 years ago in the heyday of the SACD format when hi-fi meant high fidelity. Here are outstanding performances of two famous repertoire favourites played with the panache and flair that only the world's greatest orchestra could muster. Even in stereo the recording by Polyhymnia is electrifying delivering a palpable sense of the listener being seated in the auditorium including the well deserved applause at conclusion. High Fidelity indeed, just in case we forget our roots.

An absolutely intoxicating cocktail of sound colourings that will lead you gasping for more and your feet tapping long into the night. One not to miss even if you did at the time or were not a SACD convert in those days. Simply magical and faultless.

Completely agree; I too return to this disc with great pleasure. 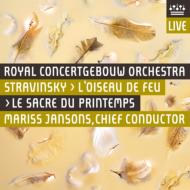