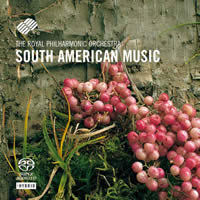 The Membran RPO series have been somewhat variable both in terms of performance and particularly recording quality, but this SACD, an imaginative program of works by South American composers, is a winner on both counts.

The programme begins with a rousing performance of the overture to the opera ‘Il Guarany’ by Gomes. This is full of good tunes and very much influenced by the style of early Verdi. It is a shame that it is not performed more often.

Huapango by Moncayo Garcia with its colourful orchestration and foot-tapping rhythms is more typical Latin American fare. It is given a performance that, while perhaps lacking some of the flare and uninhibited quality of some other versions, such as that by Enrique Batiz on Naxos (RBCD only), is still hugely enjoyable.

The final movement (Toccata) of Bachianas Brasilieras No.2 by Villa-Lobos often called ‘The Little Train of the Caipira’ has achieved great popularity as a separate item. It is a brilliant and amusing depiction of the journey of a puffing and creaking little train through the interior of Brazil, perfectly illustrated through the use of a beautiful winding melody and imaginative use of an extensive percussion section. Honneger’s Pacific 231 on a similar subject comes to mind, but this is more concise.
The other three movements of this work are equally worth hearing. The sultry opening of ‘The Song of the Countryman’ features some sensuous, almost sleazy, saxophone writing, relished to the full by the players in the RPO while ‘The Song of Our Country’ perfectly exemplifies the fusion of Bach and Brazilian popular and folk music that Villa-Lobos sought to achieve.

Perhaps the main reason for acquiring this SACD is for the wonderful Variaciones Concertantes by Ginastera. This beautifully written and inventive work consists of a theme, and a set of eleven variations on it. Each of the variations features a solo instrument, or pair of instruments, from the string, brass or woodwind sections of the orchestra while an exciting Rondo Variation for the full orchestra rounds off the piece.

The principals of the RPO play their solos superbly, while the recording made in July 1994 is very good, in spite of its 16bit/44.1kHz PCM origins, and, in the multi-channel mix, provides a sense of air around the instruments that is not always evident on other recordings from this source.
Each of the twelve sections of the piece have been helpfully annotated in the booklet notes and given separate track numbers.

There is only a three second gap left between each individual work, a minor annoyance common to most Membran releases, but in all other respects a very recommendable release.