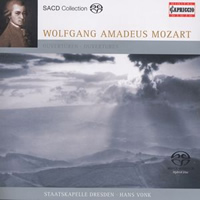 You might think that the discs in mid-price Capriccio's SACD Collection series, with their DSD logos and multichannel sound, would be good bargain high-resolution recordings. Based on the several I have acquired, you would be wrong. They are basically RBCDs of variable recording quality from the 1980s with synthesised centre and rear channel information on the MC section of the SACD, and mastered using DSD. We are not told if the recordings are ADD or DDD, and the information about the recording dates is in the small print on the insert. I wonder how many SACD buyers have fallen for this and been disappointed, especially with mail-order purchase?

In the present case, we have the potentially attractive proposition of a good collection of Mozart overtures played by the superb Staatskapelle Dresden under the baton of Hans Vonk, recorded in the well-known venue of the Lukaskirche - in July 1987. The MC layer sounds like an average CD recording of the period, with very low levels of synthesised sound in the centre and rear channels. It is hardly worthy of an MC designation. In fact, the stereo SACD section sounds virtually identical, and I was unable to distinguish either SACD mode reliably from the RBCD layer. The orchestral sound is listenable and well-balanced, with the Lukaskirche acoustic having a somewhat metallic quality, but the strings have little bloom. However, playing the analogue output of the Stereo SACD from my player through the Dolby PLII Music synthesiser in my pre-amp produced a much richer and more involving sound - notably better than Capriccio's alleged MC track!

A pity about the sound, because both the playing and direction are very good. I would normally prefer to hear these overtures played by a chamber orchestra or a period instrument orchestra, as a large modern orchestra often has a certain inertia which damps their sparkle. Vonk, however, has managed to balance the large string section very well against the woodwind and brass so that these departments sound more or less as prominent as Mozart would have expected. There is plenty of fire, drama and energy here, with clear relaying of the German and Italian styles. The selection too is good, from Mozart's early works which are often 3-movement symphonies (with several of these, he later added a finale and counted them as real symphonies), to his final single movement form, a true opera overture. In general I enjoyed this collection, but still was thinking how much more attractive it could have been with better sound. If you want bargain SACDs to start a collection, then many of the Membran discs are better value.

Caveat emptor then, for this issue. You would probably be better off buying a more recent RBCD and using your Dolby PLII Music chip to produce your own multichannel sound, until a true SACD version comes along.